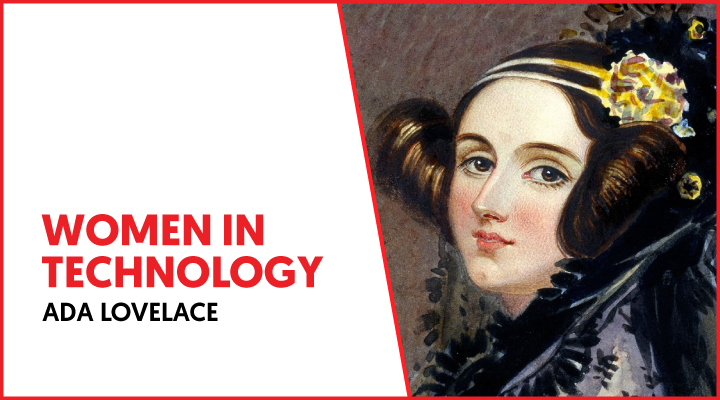 New episode of the ‘Women in Technology’ series. Today, International Women’s Day, this post couldn’t be dedicated anybody but  her: Ada Lovelace. Considered the first woman programmer  in history, Lovelace has been the most mentioned reference by our colleagues, maybe for being a pioneer in a world -the Mathematics and Science- reserved exclusively for men at that time. Our colleague, Vanesa Fernández, remembered her figure in this way:

“I like history and knowing how we got where we are now. There are women in history who have been able to dedicate their life to technology and have also stood out, like Ada Lovelace.”

Who was Ada Lovelace?

Lovelace was a British mathematician, computer scientist and writer who made history for all her work on Charles Babbage’s general-purpose calculator, the “Analytical Engine,” considered the antecedent of the modern computer. Ada Lovelace translated into English a document published in a French magazine about Babbage’s invention and included explanatory notes that the inventor included in the final paper. Among these notes was found the first algorithm to be processed by a machine, making her the first computer programmer in the history.

Augusta Ada Byron, known as Ada Lovelace, was born in London on April 10th 1815 and died on November 27th 1852. Lord Byron’s daughter, Ada was an English mathematician who didn’t inherit her father’s passion for numbers. It was her mother, Anna Isabella Milbanke -who left the popular Byron after her marriage- who provided her with an exceptionally strict education in Maths, as she was a scholar in this field and a social activist too. Lovelace, the last name she is known today for, comes from her marriage to William King, Earl of Lovelace.

Ada died at age 36 from uterine cancer. Lovelace was the first computer programmer who contributed to Charles Babbage’s work, a mathematician who designed an analytical engine that would work on the same principles as future computers. Impressed by Ada’s talent, Babbage made her his assistant and she invented a notation to describe algorithms in that machine, creating the first programming language. In addition, Lovelace included the punched card system, inspired by Jacquard’s loom, which would be used in the mid-20th century to program the first computers. In addition, she wrote down the possibility that the analytical machine -this kind of original computer- was not only a tool able to perform mathematical calculations, but also to “produce art, compose music and literature”. In fact, she stated that this revolutionary invention would be able to do whatever was asked for, as long as we knew how to order it.

Ada’s notes were published in ‘Scientific Memoirs’ in September 1843, under the title ‘Sketch of the analytical engine invented by Charles Babbge’. Her female condition meant that she had to sign her work with her initials A.A.L. Now, her life and work can be found through an infinite number of sources, such as James Essinger’s book, ‘Ada’s Algorithm‘. In recognition of her important work, the U.S. Department of Defense developed a programming language that she called ‘ADA’ in her honor.

Due to her excellent education and her noble social position, Ada Lovelace was related to the most important scientists of the time, such as Andrew Crosse, Sir David Brewster or Michael Faraday, but her interests were not limited to numbers’ world. As a writer, she became friends with Charles Dickens, who took the opportunity to expand her literary education. In order to explain both passions, Lovelace often referred to herself as a “scientist and poetess. Another famous quote is that which had to do with her ” faiths “. She proclaimed “I am more than ever the bride of science. For me, religion is a science, and science is religion.”

Although there is no record of her opinion on women’s roles, it is clear Ada also experienced censorship in her career because of her condition, despite all her contributions to the science and technology world. But history has recognized her role and opened the way for many other women in this field. Women played a decisive role in her education. First, her mother, who provided her with a varied and strict education, as well as giving her courage and perseverance values. Later, the Scottish mathematician and scientist Mary Somerville was her tutor and a great support in her career. Somerville became Lovelace’s reference and today she has become a referent for our Gradiant colleagues.

Since 2009, October’s second Tuesday is Ada Lovelace Day, aimed at recognizing the profile of women in STEM disciplines.