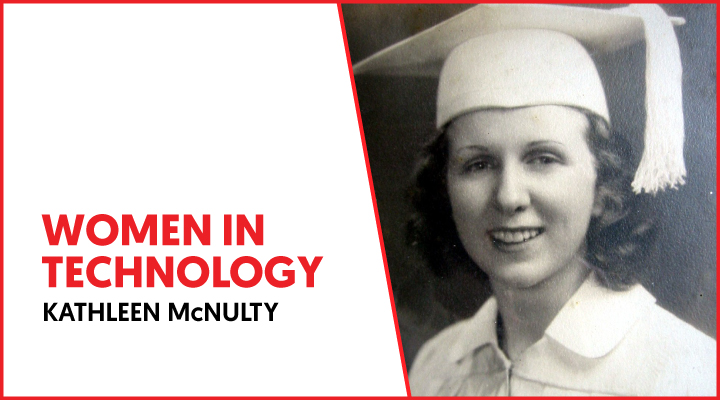 During World War II, U.S. gunners pointed their weapons using firing charts, complete lists containing the trajectories that missiles could follow depending on the type of weapon, geographic location, and the speed of time. Each table had approximately 3,000 trajectories, each requiring 750 calculations. These calculations were done by hand by so-called computers, women mathematicians, at the Aberdeen Proving Grounds military base until the government approved the secret construction of the first digital computer that would do this job: the ENIAC. The technologist to whom we dedicate this post started being a computer to finally be one of the six mathematics that programmed the ENIAC later. Today we tell you the story of Kathleen McNulty by the hand of our colleague Nora M. Villanueva:

Who was Kathleen McNulty?

Kathleen McNulty was an American mathematician born in Ireland who aspired to find a job in which to make use of her scientific knowledge without this being teaching; so her life changed when she responded to an advertisement in the local newspaper with the slogan: “we search women with a degree in Mathematics”. That’s how she became a computer, what means women calculating ballistics trajectories by hand for the Ballistic Research Laboratory in the U.S. during World War II. Later, in 1947, McNulty was chosen to be one of the programmers of the Electronic Numerical Integrator and Computer (ENIAC), a general-purpose digital computer capable of being reprogrammed to solve numerical problems. The ENIAC is considered the first digital multifunctional computer in history.

Kathleen “Kay” Rita McNulty Mauchly Antonelli was born in Donegal (Ireland) on February 12th, 1921, during the country’s wars of independence. Her father, a Republican army officer, was arrested when she was just born and spent several years in prison. After her release, her family immigrated to the United States in 1924 and settled in Pennsylvania, where McNulty spent her childhood. In 1942, Kay earned her Math degree from Chestnut Hill College for Women, which she later completed with studies in finance and business.

Attracted by the idea of pursuing mathematics without working as a teacher, McNulty encouraged a classmate to apply for an interview for an army-related job. Both were hired as computers or “human computers” and later participated in ENIAC programming. During this time, she met her husband (ENIAC co-inventor John Mauchly) with whom she had five children. In 1980, Mauchly dies, but Kay continues ENIAC’s legacy by writing various articles and giving lectures. In 2006, Kathleen McNulty was diagnosed with cancer and died in April of that year.

Despite all her training in mathematics, McNulty was unfamiliar with the numerical integration methods used to calculate trajectories, so her beginnings as a human computer was not easy. However, she quickly began to stand out among the 75 women who formed the calculus division and was transferred to work on an analogue calculator that reduced the calculation time from 40 hours with a mechanical desktop calculator to 50 minutes.

In order to do the same type of calculations, the University of Pennsylvania and the U.S. Army signed an agreement to secretly develop ENIAC, the first modern computer. McNulty was chosen to program this computer between 1943 and 1946 along with five other excellent women in calculations: Betty Snyder Holberton, Jean Jennings Bartik, Marlyn Wescoff Meltzer, Ruth Lichterman Teitelbaum and Frances Bilas Spence, her colleague at the university who attended her first job interview. They were responsible for the ENIAC being able to make 5,000 sums and up to 300 multiplications in just one second, the creators of the first library of routines and the executors of the first software applications.

Due to her work as a computer first, and her involvement in the programming of the ENIAC later (computer that would replace a part of these human “calculators” women), it is said that Kathleen McNulty used to joke that she herself would be “the first computer to become obsolete”. In 1997, her name, along with that of her five fellow programmers, was included in the Women in Technology International Hall of Fame in recognition of her work in the field. “The Computers”, a film directed by Kathy Kleiman, Jon Palfreman and Kate McMahon, tells the story of these six computer women.