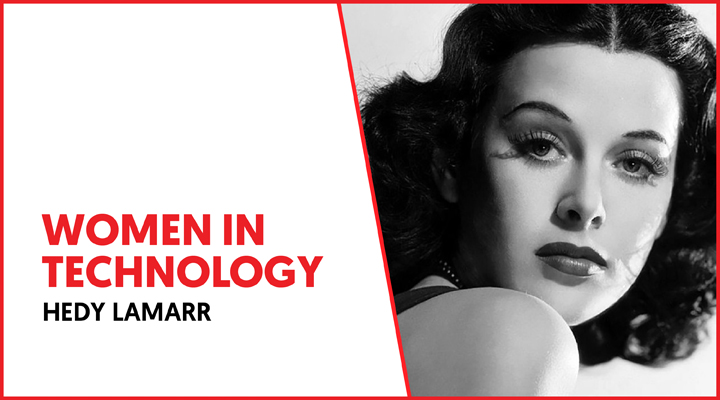 New episode of the ‘Women in Technology’ series, this time dedicated to an amazing figure: Hedy Lamarr.  Successful Hollywood actress and scientist, her biggest contribution to ICT world was in the wireless communications sector. Lamarr’s technology was used to control communications and nowadays it is working in mobile networks, Bluetooth devices and WiFi. Our colleague, Sara Cela, introduced us to this technology female referent:

“Delilah, from ‘Samson and Delilah’ movie is my role model. Not the character. I like the woman behind the character; Hedy Lamarr. Considered the most beautiful woman in the cinema history, she was the inventor of the communications system known as “wide-sprectrum transmission technique”, which many of today wireless technologies are based on”

Who was Hedy Lamarr?

As Sara told us, Hedy Lamarr was a well-known 20th-century actress, recognized as the most beautiful woman in European cinema, who combined her big-screen performances with her “role” as a real telecommunications engineer. She and composer George Anhiel invented the Spread Spectrum, a secret wireless communications system to guide torpedoes by radio frequency (RF) to combat Nazi ships and submarines in the World War II. Although the system was finally used only during the 1962 Cuba’s missile crisis, it is considered the precursor of modern WiFi.

Hedwig Eva Maria Kiesler, better known as Hedy Lamarr, was born in Vienna on November 9th, 1914 and died in Florida (U.S.) on January 19th, 2000. She was the only child of a Jewish banker and a pianist. Many biographies indicate since childhood, Hedy always stood out for her intelligence. At the age of 16, she started her engineering studies but three years later she left them to discover her artistic talent. In 1933 she started to work as an actress in a Berlin theatre under the direction of playwright Max Reinhardt. Her filmography includes more than 30 titles, including A Lady Without Passport, The Conspirators and Ecstasy.

Her parents soon arranged a marriage of convenience with Friedrich Mandl, a billionaire whose business was focused on supplying ammunition for Hitler and Mussolini. According to Hedy Lamarr memories, her husband forced her to give up acting and stay at home under his own strict control. At this time, Lamarr continued her engineering studies and got the details of the weapons technology time from her husband’s customers. The actress and technologist transferred this information to the U.S. authorities and some years later she used it to create and patent her frequency switching technique.

However, the first use of the patent didn’t come until 1962, when the U.S. military realized the usefulness of the invention at the Cuban missile crisis. The same technique was used in some cases in the Vietnam War and, later, in the U.S. Milstar satellite defence system. In 1980 the invention had civil use in the first frequency commutations that allowed the implantation of WiFi data communication.

Hedy Lamarr had a life that could have been part of one of the films she starred in. She refused to live under her first husband’s control, so she worked out a crazy plan to leave her prison and go on with her life. She fled to Paris, then to London and once there, she sailed to the United States. Where she lived until her death and developed her successful career as an actress, performing in the first female nude in the Hollywood history.

Due to different reasons, she was unknown as a technologist for decades. One of them could be that Hedy Lamar used her married name (Hedwig Kiesler Markey) for the patent and not her stage name, so recognition for her invention would not come until a few years later.

In 2017, director Alexandra Dean brought her technological talent to the big screen in the documentary Bombshell: The Hedy Lamarr Story, produced by the actress Susan Sarandon.