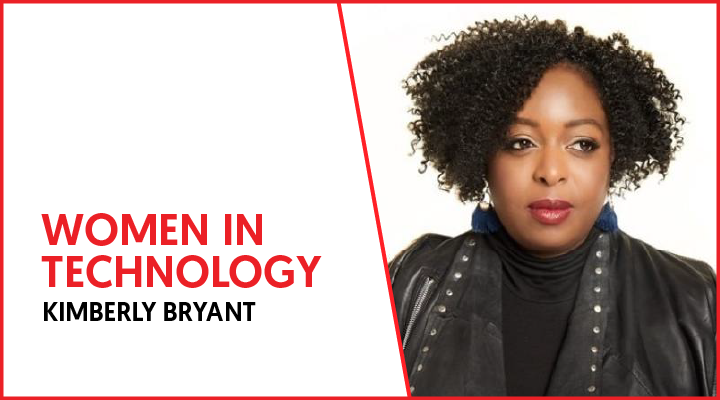 According to a study by the National Center for Science and Engineering Statistics, women are less likely to choose careers in computer science and engineering, despite the fact that women now earn half of all undergraduate and doctoral degrees. On the other hand, women scientists and engineers still receive lower salaries than their male counterparts in most occupational groups. If we look at underrepresented women, despite the fact that they occupy more academic positions in recent years, their proportion remains small and lower in reference to the total population.

That’s why in this month’s Women in Technology section we want to highlight the story of Kimberly Bryant, an African-American engineer and biotechnologist who founded a non-profit organization to educate and empower black girls in the world of technology and programming.

Who was Kimberly Bryant?

Kimberly Bryant is an African-American electrical engineer known for being the founder of Black Girls Code, a non-profit organization to teach basic concepts in programming and computer science to black girls who are underrepresented in technology careers in order to empower and increase opportunities for women and girls within the male-dominated technology industry.

Kimberly Bryant was born in Memphis, Tennessee, on February 14, 1967. Her passion for math and science led her to study electrical engineering at Vanderbilt University, majoring in computer science and high voltage electronics. After graduation she began working at Westinghouse Electric and DuPont and later worked for electrical, biotechnology and pharmaceutical companies such as Pfizer and Novartis.

Due to his daughter Kai’s interest in learning programming and the lack of courses available in San Francisco, where most of the attendees were men. In addition, the number of female engineering graduates is lower than it was thirty years ago and only 3% of them are women of color. So she decided to found Black Girls Code. Her experience both in college and in corporate environments helped her realize that African-American women were not typically pursuing these career paths, so the creation of this organization would help other girls like her daughter have a better experience than she did.

Black Girls Code teaches programming to girls, especially minority girls, to enable them to enter STEM careers and increase awareness and visibility of the field. The long-term goal of this initiative is to teach coding to 1 million black girls by 2040 to promote diversity and end historical inequalities based on race and gender in this field of study.

Bryant decided to undertake an initiative to end the social and gender gap with the creation of Black Girls Code, a non-profit organization located in San Francisco that aims to introduce black girls between the ages of 6 and 17 to the world of technology through after-school classes and summer camps in order to integrate new generations into the field of technology. In this way, the organization teaches computer programming, electrical engineering, mobile application development, robotics and other STEM fields and emerging technologies.

Founded in 2011, a year later it would expand to 10 U.S. cities and later to Johannesburg, South Africa. Since its inception, it has reached some 3,000 students and hopes to establish itself in more American cities. The organization also expects its students to fill some of the 1.4 million jobs in the sector in the United States in the coming years.

To date, Bryant has garnered numerous accolades for her work. In 2013 she was recognized as a White House Champion of Change for Technology Inclusion and in the same year she was listed as one of the 25 most influential African Americans in tech by the trade magazine Business Insider.

The engineer was inducted into the Women in Technology Hall of Fame in 2016 and the organization Bryant founded was chosen in 2012 as that year’s “Most Innovative Nonprofit” by Bank of the West. In 2019, she received the SXSW Interactive Festival award.