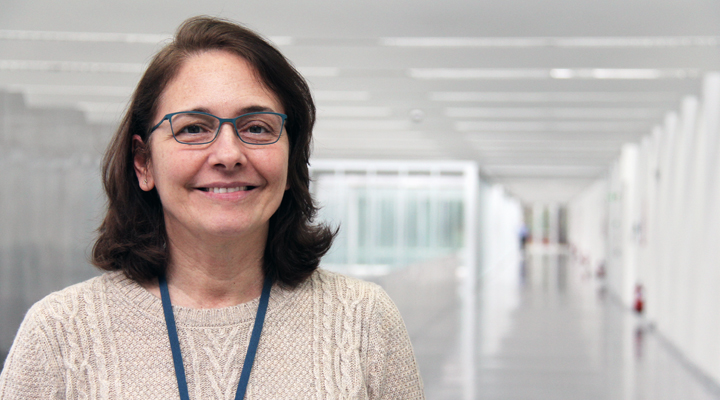 In a new edition of interviews with women technologists on our team, we introduce you to Helena. A few years ago, our colleague moved from her hometown of Rio de Janeiro to Braga (Portugal) where she did her doctorate. Helena joined the GRD team in 2012 and a year later she became the director of Gradiant’s eHealth area and she still is. In her free time, our colleague loves reading and gardening, although she is now trying tennis but confesses that she enjoys it a lot.

I had no idea because I was interested in many different fields. When I grew up, I opted for the technological field in which I currently work.

I started my career taking the Electricity and Electronics course, where I had the opportunity to take a one-year scholarship at the state-owned telecommunications company in Rio de Janeiro. At the end of that year, and after my training there, I decided to go to university and start my higher studies in Electrical Engineering, so it could be said that technology was a natural choice.

I did my graduate and master’s degrees at the State University and the Federal University of Brazil due to their proximity and reputation and because the courses were free of charge. After that, I did my doctorate in Miño University (Portugal) where I now live.

I am currently the director of the eHealth area at Gradiant, where we apply information and communication technologies (ICT) to health and wellness sector.

I like a lot of things so I couldn’t have just one. Among my favourites to work at Gradiant are the possibility of professional development and the fantastic working culture here.

The truth is that I have been inspired by many women along my professional career. Among those who paved the way for other women in the world of technology, I would highlight Ada Lovelace, and among those who do today, Virginia Rometty -current president and CEO of IBM-, my colleagues at Gradiant, and especially my daughter, who is building a brilliant career in telecommunications engineering.

I would tell them there are a lot of opportunities waiting for them in this field.