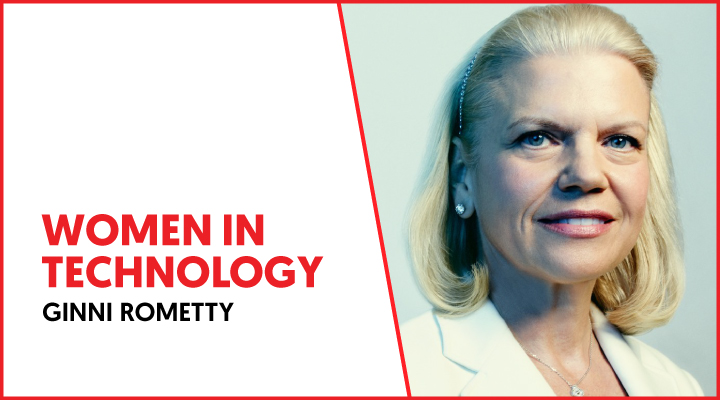 Our today’s female referent is, more than a technologist, a real business woman. Virginia “Ginni” Rometty is an electrical engineer, entrepreneur and the first female CEO of IBM, a position she currently holds. In 2018, she was recognized as one of the 100 most powerful women in the world by Forbes magazine for her work as CEO at IBM, where she combines management skills with technical excellence. Our colleague Helena Fernández told us about “Ginni” as one of her referents:

“The truth is that I have been inspired by many women along my professional career. I would highlight Ada Lovelace, because of her dedication and efforts to open the way for other women; and Virginia Rometty -current president and CEO of IBM-, who is also a very successful business woman”.

Who was Ginni Rometty?

Rometty is an American senior executive who started her professional career as a systems developer for the Detroit’s company General Motors and now she is the CEO of IBM. At International Business Machines she held several roles related to engineering, sales, marketing and strategy. Currently, her job focuses on the global management of the company in data analysis, cloud computing and cognitive computing systems areas.

Virginia Marie Rometty Nicosia -also known as “Ginny” Rometty – was born on July 29th 1957 into an Italian-American family settled in Chicago (USA). At the age of 18, she began her studies at Northwestern University through a General Motors scholarship and finally she graduated with honours from the Robert R. McCormick School of Engineering and Applied Sciences at the same university.

Rometty joined the General Motors Institute of Technology (Kettering University) when she finished her studies. There, she was the application and systems developer manager until 1981 when she joined IBM, as an analyst and systems engineer. At the New York technology company, she held different technical roles until she joined the sales team in the 1990s and became General Manager of the Global Services division. At this time, she was part of the negotiation that resulted in the acquisition of Price WaterHouse Cooper for $3.5 billion and introduced IBM into the services sector. Since 2012, Rometty has been IBM’s President and CEO. For the first time in history, the company started to be run by a woman.

As we have already explained, Rometty’s career stands out for the combination of her technical and business skills. She led IBM’s growth strategy by introducing the company to cloud computing, data management and analysis, cybersecurity and mobile technologies, as she realized that sales of computers and software licenses were slowing.

In addition, Rometty has become a star of the most important technology fairs in the world. Her presentation at CES 2019 last January was one of the most expected and there the CEO of IBM decided to focus on the importance of Artificial Intelligence and data as “the largest natural resource in the world”.

Besides her job at IBM, Rometty is also a member of the Council on Foreign Relations at Northwestern University and was a member of the Board of Directors of American International Group (AIG) until 2009.

Her hobbies include Broadway shows and some sports such as diving and swimming, but her real passion is playing golf. Rometty is a member of the Augusta National Golf Club, one of the most exclusive golf clubs in the world founded by acclaimed golfer Bobby Jones in 1933.