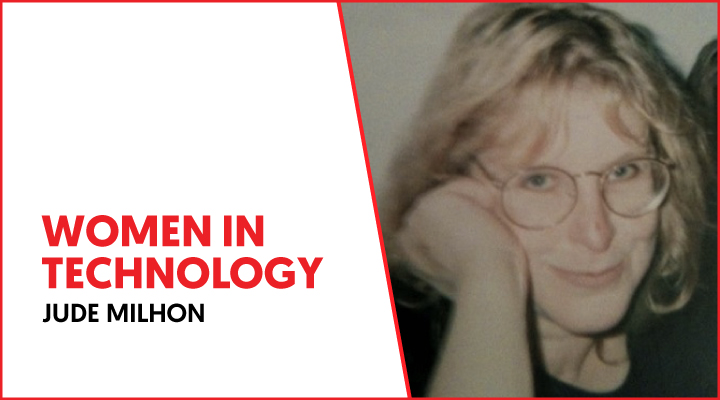 Over 2018 we introduced you to each of the women who are part of Gradiant, including technologists and women working in technology. In this time, we have known a lot about the nearly twenty interviewees: what or who pushed them to focus on the STEM disciplines and what they like the most about their jobs. In addition, our colleagues have introduced us to some female names that have made history in the tech world, many of us may not even hear about that.

2019 is the year to discover these women in technology who were an inspiration to our colleagues, so they can now inspire future generations. Last February 8th was the International Day of Women and Girls in Science and now we’re starting this new section with our first famous women in technology: Jude Milhon.

That’s how our colleague Paula Taboada introduced us to Jude Milhon, programmer, writer and one of the first female hackers in the history, as well as a resolute defender of cyber rights.

Who was Jude Million?

When the IT world was considered a male-only place, Milhon -who was also known for her nickname ‘St. Jude’ or ‘St. Jude, protector of hackers’- learned to program in a self-taught way after reading the Teach Yourself Fortran guide, where some instructions were given to use this programming language through mathematics.

Milhon was born on March 12th, 1939 in Washington DC and died on July 19th, 2003 in San Francisco, California. She lived most of her teenage years in Anderson, Indiana, where she was arrested many times for civil disobedience, as she was a civil rights activist from a very young age.

Her first job as a programmer was at a vending machine company for the Horn and Hadart self-service stores in Manhattan. After a few years in the big city, she settled in California in the midst of the hippie movement and, under its influence, she joined and encouraged other women to join the cyber culture. In the late 1990s, she worked as a web designer.

Among his great feats was the defense of a public network when the Internet was still in very few hands (U.S. military, and a small number of universities and research institutes).This fact motivated her to create the first public network system known as the Memory Community Project in 1973. Another significant event was her involvement in women’s right to access technology, which inspired her to write Hacking the Wetware: The Nerd Girls Pillow-book. “Girls need modems” or “when you’re in cyberspace no one knows what your sex is” are some of her most famous quotes related to her fight for equality in the technology sector, as she matched women’s need for Internet access to schooling: “The Net is like the school that many of us have never had the chance to attend.”

Milhon coined the term cypherpunk and was a founding member of the ‘Cypherpunks’, an association of digital privacy activists. She was a member of Computer Professionals for Social Responsibility, and author of several books, including The Cyberpunk Handbook and, with R. U. Sirius, How to Mutate and Take Over the World. Milhon and Sirius also founded and edited the technology culture magazine Mondo 2000, where Milhon worked as editor-in-chief until her death.