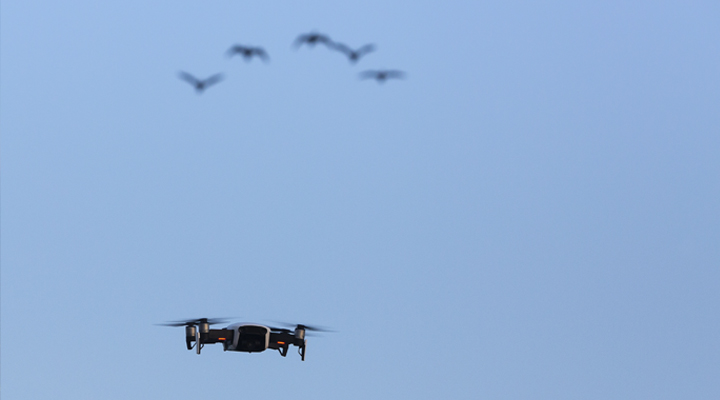 Gradiant’s videoanalytics technology has got the first place, showing the robust and reliable algorithms designed by the Galician RTO

Once again, Gradiant has succeeded reaching the first place in an international competition. Gradiant’s videoanalytics technology has achieved the highest score in the Drone-vs-Bird Detection Challenge, celebrated during the 3rd International Workshop on Small-Drone Surveillance, Detection and Counteraction Techniques (WOSDETC2020) and the IEEE International Conference on Advanced Video and Signal-based Surveillance (AVSS 2020).

Organised by the University of Salento (Italy), the Fraunhofer Institute (Germany) and the Centre for Research and Technology-Hellas (Greece), the main goal was detecting and identifying drones against birds at long distances, one of the greatest challenges currently faced by video analysis technologies. “Although we have participated in competitions like this before, this time we have been able to prove the reliability and the advanced nature of our algorithms to provide solutions to real problems, such as the identification of drones in front of other objects, in this case birds” explains Miguel Méndez, researcher at Gradiant.

Celebrating international competitions like this allows to share knowledge and technology innovation carried out in universities, technology and research centres and industry to face up the illegal use of drones, such as terrorist attacks, drug trafficking or shutdown of air traffic at an airport.

The challenge: protection against drone threats

There is a real concern regarding incidents caused by UAS, which can lead to serious consequences in hands of terrorist organisations, organised crime groups; or drone users that endanger the security of critical infrastructure, such as airports, government buildings or sports stadiums. The use of video analytics techniques contributes greatly to solving this problem, but it also has additional challenges, such as the easy misunderstanding of drones with other objects (e.g. birds) or the minimum size that unmanned aerial vehicle must have in order to a system can distinguish.

“The outcome we have achieved is the result for more than 12 years working on computer vision and artificial intelligence and, more recently, on deep learning techniques too. The training of our algorithms, with many images of drones and birds during the last years, has been essential to improve our system” points out Iago Gómez, Gradiant’s international business development manager.

Gradiant’s video analytics technology has already been tested in real scenarios, hand in hand with security agencies. Based on Deep Learning and Artificial Intelligence techniques (imitating the behaviour of the human brain), SmartEye detects and recognises objects at distances of more than one kilometre and in different scenarios (open sky, wooded areas, etc.),  guaranteeing security against drone attacks and avoiding potential damage to civilians or critical infrastructures.

The future of video analytics

“The work we have been doing on projects such as Galician SkyWay has allowed us to get better and better our technology and make great progresses in research”, highlights Miguel Méndez, who adds “still, there are challenges to be solved over the next few years”.

According to the experts, improvement in video analytics technologies will get with the increase in the number of images processed every second, the minimum size and the distance a drone can be detected from, the ease of tracking its trajectory and its operation in devices with limited hardware. There’s also another major challenge: developing these systems with increasingly smaller datasets. Thus, systems such as smartEye can be trained with artificially generated data, making much easier using the system in all kinds of scenarios, including those with not a large amount of real data for such training.