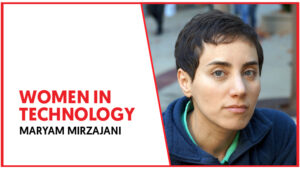 Today we write about a woman who showed that perseverance is the key to success, and it does not always take a long time to succeed. She is considered one of the most relevant women in the world of mathematics in recent years, and the rector of the university where she worked as a professor defined her as:

“A brilliant theorist and also a humble person who accepted honors only in the hope that they could encourage others to follow their path. His contribution as an academic and as a motivation model is significant and lasting”.

Maryam Mirzajani was a mathematician and professor of mathematics at Stanford University. Although, she really stands out for being the first woman to win a Fields Medal, equivalent to the Nobel Prize in mathematics, and because she was the first Iranian student to succeed in the world of the Hong Kong and Canada International Mathematical Olympics, where she won several medals.

Her short life began in Tehran in May 1977. She chose for her training the Sharif University of Technology, located in her hometown, where she graduated in mathematics at the age of 22.

Her successes in science seemed to have no end, and it is that the young woman won the Blumenthal Prize of the American Mathematical Society in 2009, the Ruth Little Satter -which awarded the work of women of science- four years later and the Fields Medal within a few months.

All this made Maryam Mirzajani the first woman to achieve the highest distinction in the world of mathematics, but the reality changed her world when she was diagnosed with breast cancer at the age of 36.

Mirzajani was a persevering and tenacious woman, and because of that she got the strength to go so far in the field she worked in and what made her fight cancer for three years. Unfortunately, on July 15, 2017, the mathematician died in the United States.

Legacy in the tech industry

She astonished the audience with her study of a problem concerning the trajectory of billiard balls on a polygonal table and achieved great advances in Riemann surfaces and Moduli spaces.

In addition, her studies made a strong contribution to the study of primes and cryptography, as well as to the resolution of questions that focus on the study of the origins of the universe.

All her research has revolved around Teichmüller space, hyperbolic geometry, ergodic theory and symplectic geometry.

The job Mirzajani dreamed of as a child was far from the profession she worked in . Her biggest hobby at the time was reading. She was passionate about the world of novels, although in general she read everything that came into her hands.

So she started high school without paying any attention to mathematics and science and it was her brother and his affinity for working with tests that made her change her mind and start enjoying research. From that moment on, the Iranian dedicated herself fully to numbers, always considering that not everyone had to follow in her footsteps, but that there should be more students who, like her, give mathematics a chance.