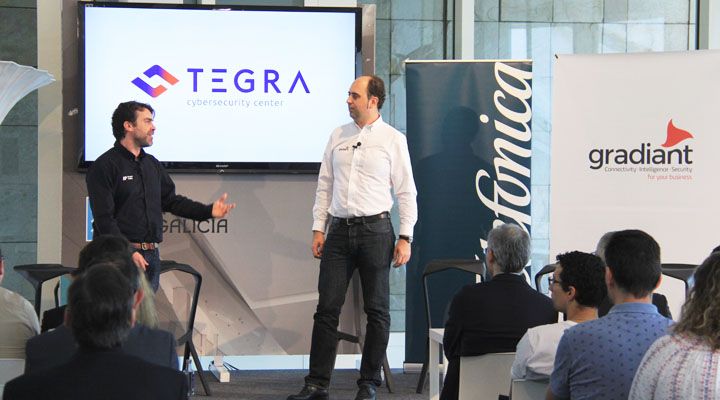 Telefónica and Gradiant will gather at Galicia along with the support of the autonomous government of Galicia, showing their important role in the field of European cybersecurity.

With their headquarters in Vigo and A Coruña, they will develop advanced products and services for business and collaborate with organizations and entities throughout the world.

Telefónica and Gradiant have presented today the TEGRA cybersecurity center, which started with the vocation of situating Galicia as a relevant agent in the field of cybersecurity and in order to create qualified employment in the sector with huge demand and potential growth.

TEGRA started within the framework of the mixed research unit IRMAS (Information Rights Management Advanced Systems) and their presentation has taken place during the ‘Cybersecurity in the Industry 4.0’ day, which was co-organized by Telefónica and Gradiant and celebrated today in the City of Culture, Santiago de Compostela.

The objective of the TEGRA Cybersecurity center is to develop products and services in order to improve companies’ information security through advanced cryptographic techniques, to design identity checking mechanisms to access information and data analysis tools, in addition to classification, detection and documentation systems of abnormal access to information. TEGRA will also generate strategic alliances which will allow them to widen companies’ security, collaborating with organizations and entities such as the European Commission, CyberThreat Alliance, Europol, Incibe, Organization of American States (OEA) and ECSO, the European Cyber Security Organization, of which Telefónica and Gradiant are members.

Another one of the TEGRA objectives is to generate R&D&i employment in Galicia. Telefónica has been committed in recent years to positioning itself at the forefront of cybersecurity product development, creating the Global Cybersecurity Unity, ElevenPaths. In this bid, Telefónica found Gradiant as a member of solvency in order to carry out this journey together, and TEGRA will allow that part of this innovation can be carried out in Galicia, attracting an emerging line of R&D&i to the autonomous community and thus demonstrating the Company’s commitment to this territory and its position of maximum relevance as a tractor of the Galician ICT sector. Gradiant was founded in 2008 and has since become a relevant actor in the field of ICT innovation in Galicia; highlighted especially for their innovation capacity and solutions for businesses worldwide.

In the face of the advancing global cybersecurity threats, TEGRA is positioned in Galicia in a relevant global position in European policy within this area. The center kicks off their activities with 20 specialists and two offices, one within the Gradiant headquarters in Vigo and the other in the Telefónica headquarters in A Coruña. Telefónica and Gradiant participate in the new center with a similar investment, 1.2 million euros from Telefónica and 1.1 million euros from Gradiant, and 678,000 euros from the autonomous government of Galicia through the Axencia Galega de Innovación (GAIN). In addition, the joint cybersecurity research unit IRMAS, in which marks the birth of TEGRA, is co-financed by the Operating Program FEDER 2014-2020 by the European Union, whose objective is to promote the quality of technological development, innovation and investigation. In the organizational field, TEGRA will be co-directed by Juan Elosua, coming from Telefónica-ElevenPaths, and Juan González, from Gradiant.

TEGRA’s birth has generated some expectations within the Galician industry and amongst among the almost two hundred attendees of the conference on Cybersecurity held this morning in Santiago, it was launched by the Telefónica’s director in Galicia, Marta Menéndez, and the Gradiant’s executive director, Luis Pérez-Freire, and closed by the Minister of Economy, Francisco Conde.

According to the director of Telefónica in Galicia, “in a hyper-digital world, the ability to innovate in cybersecurity, to be ahead of threats, is already a determining factor in the productive security of nations, so, with the launch of TEGRA, Galicia is placed in a leading position in the production of cybersecurity products and services in Europe”. TEGRA is also “an example of Telefónica’s commitment to this autonomous region and its desire to collaborate with its institutions and companies”.  The executive director of Gradiant said that “cybersecurity is one of the technological pillars for building the secure societies of tomorrow and protecting the competitiveness of industry in all of the sectors” and stressed that “TEGRA will make a significant contribution in placing Galicia at the forefront of innovation in this field”.

During his speech, the Minister of Economy highlighted the role of cybersecurity as “an enabling element of the Industry 4.0, which makes it possible and safe, so the implementation of this center is an opportunity to place Galicia as a reference in the latest developments that occur in this field”. Therefore, he thanked “Telefónica for its commitment to Galicia, for its ICT hypersector and for the open innovation model that is being promoted with the Galicia Innova Plan and the program of the Mixed Research Units”, an initiative that forms part of this UMI of Telefónica and Gradiant, which has the support of the autonomous government of Galicia.

Throughout the course of the day they projected a presentation video about TEGRA, and Pedro Pablo Pérez, vice president of security at Telefónica and managing director of the Cybersecurity unit at Telefónica, ElevenPaths, spoke about “The worldwide market of cybersecurity and their real challenges”, highlighting that “with TEGRA, Galicia is committed to cybersecurity innovation, an international vocation. Which is a fast growing industry with strong worldwide demand from qualified professionals”.

Subsequently, the TEGRA directors moderated a round table entitled “Cybersecurity as an enabler of the modernization of society and industry”, in which Jorge Prado, the head of service of the General ICT Subdirectorate from Sergas; Daniel González, director of Multimodal Information at Gradiant, Félix Barrio-Juárez, manager of Talent, Industry and R&D&i Support at the National Institute of Cybersecurity, INCIBE; and Rames Sarwat-Shaker, the director of Strategic Alliances at ElevenPaths participated.