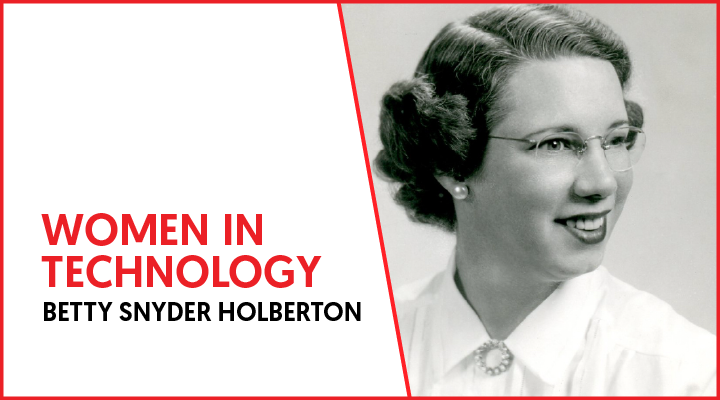 Since the beginning of time, women have been relegated to second place, overshadowed by men and not given credit for their achievements, as may be the case of Rosalind Franklin or Margaret Hamilton, among others.

Therefore, in this new Women in Technology article we present the story of Betty Snyder Holberton, one of the six programmers of the first digital and multifunctional computer, recognized for her contributions to the COBOL language and for her research in the field of programming that led to the models used today by modern computers.

Who was Kimberly Bryant?

Betty Snyder Holberton was an American mathematician and programmer who participated in the development of the first digital multifunctional computer in history used during World War II to calculate ballistic trajectories. Her contributions in the field of programming and mathematics led to the prototyping of all modern programming languages and the creation of the foundations of the modern electronic computing industry.

Frances Elizabeth Holberton was born on March 7, 1917 in Philadelphia, United States. She decided to study mathematics at the University of Pennsylvania because of her vocation, but in the face of misogynistic comments from one of her professors urging her to stay at home raising children, she decided to change to journalism, one of the university careers open to women at that time.

During World War II, due to the lack of men in the country because of the conflict, the U.S. Army hired women to work on calculating ballistic trajectories, which were initially calculated by hand. In this way, Betty was accepted along with many other women like Kathleen McNulty by the Moore School of Engineering to work as computers or ‘human computers’ for the US Army, considered as “sub-professionals”.

Shortly thereafter, she was selected – along with five other women mathematicians – to develop a pioneering program: the first electronic computer, the Electronic Numerical Integrator And Computer (ENIAC). The ENIAC was secretly used during the early years of the conflict to calculate the trajectories of nuclear missiles being built at Los Alamos National Laboratory and was capable of performing 5000 additions and 300 multiplications per second thanks to the work done by these women.

Years later, she participated in the development of the UNIVAC I, the first computer controlled by keyboard-entered instructions available on the market. In her later years, she continued to work in programming and mathematics in high-level positions and received several awards for her contributions in these fields.

During her work on the development of UNIVAC I by designing the control console and its computer and numeric keyboards, Betty wrote the first generative programming system and the first statistical analysis package, which would be used in the first U.S. census in 1950.

In addition, she contributed to the development of the C-10 instructions for BINAC, now considered the prototype for all modern programming languages. Related to this field of study, he also participated in the writing of the first standards for COBOL and FORTRAN together with Grace Hopper.

In 1997, she became the only woman of the six who had contributed to the programming of the ENIAC to receive the Ada Lovelace Award, one of the most prestigious awards in the field of programming, as well as the IEEE Computer Society’s IEEE Computer Pioneer Award. In the same year, the six ENIAC programmers were inducted into the Women in Technology Hall of Fame as a token of recognition for their work almost 50 years earlier.

Due to their influence in the world of programming, there is currently an institution called Holberton School, which exists in several countries and has graduated professionals who are currently working for large technology companies such as Tesla or Google.