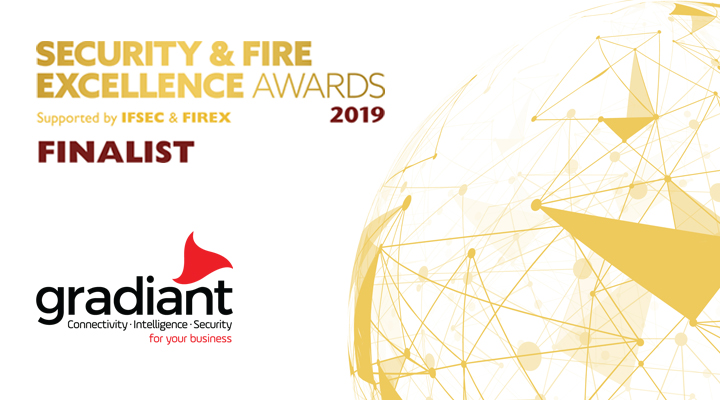 These awards are given to the best innovations, projects and products in the field of security and fire protection

London will host the awards ceremony on November 20th

Gradiant has become a finalist in the Security & Fire Excellence Awards with LifeSensor, our technology for saving lives in the category of ‘Security Technology Innovation of the Year’.

Delivered annually by United Business Media (UBM), organizers of IFSEC International and FIREX International, these awards have become the most relevant European event in the field of security and fire protection, where the work of professionals is recognized and rewarded. After twenty editions, this year the organization has adapted the categories of the awards to the current reality, focusing more on the company, people, teams and projects.

“This nomination is a great recognition for our work in the field of emergencies and security, demonstrating once again that our technologies are competitive in the international market. LifeSensor is giving us great satisfaction and we are sure this will continue to the coming years, as well as confirming the consolidation of our technologies worldwide” explains Iago Gómez, co-director of Advanced Communications department at Gradiant.

The awards ceremony is taking place on November 20th in London.

LifeSensor is a vital monitoring system capable of detecting a person’s movements at a distance, as well as measuring their breathing rate when the person is still. “This technology makes possible to monitor the respiratory rhythm and movement of a person in a non-invasive way, preventing and avoiding deaths in closed places”, notes Luis Pérez Roca, co-director of Gradiant’s Advanced Communications department.

Based on radio frequency technology, this system “employs a radar signal transmitter-receiver device, processing the received signal to extract relevant information about the person: whether he is still or moving, his breathing rate, etc.” details Pérez Roca. In this way, it’s possible to cover different cases of use such as the monitoring of people in vulnerable conditions: patients from hospitals, psychiatric and geriatric hospitals, although it also makes it possible to control other processes such as sleep apnea, for example; or prisoners in police custody or confined in isolation cells, making it possible to know their state at all times..

This year, Gradiant’s life monitoring system was integrated into Encartele’s CIDNET Smart Jail Ecosystem, a leading American company in the development of technology solutions for correctional facilities and prisons.