Skip to content
Home > About > The team > Iago Gómez Alonso 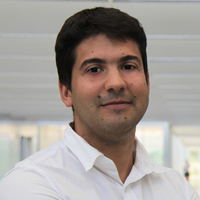 Since 2008 he is part of Gradiant, where he made his final project and later became a researcher in the area of advanced communications. In these 10 years, he has participated and directed numerous projects for national and international companies mainly for the sectors of Emergencies, Security and Defense, Aerospace and Broadcast. During this time he has also tutored several Final Projects and Master’s Final Works. His research expertise focuses on digital communications and signal processing for communications. In addition, he also has extensive experience in the design and implementation of software/hardware for embedded systems on hardware platforms (FPGA) and SDR (Software Defined Radio), as well as in the development of systems for embedded platforms.

Since 2017 he has been responsible for Gradiant’s unmanned aerial vehicle line. Since 2018 he is co-director of the Advanced Communications area, specialized in the conception, design and development of communications solutions, signal intelligence, positioning and payloads for unmanned systems.