Within the Industry 4.0 activities, research is being carried out into the development of the Digital Twin, a tool for transforming the business in such a way that a holistic understanding of the company can be obtained and facilitates optimal decision-making and effective actions. Companies such as Siemens, Bosch or Schneider Electric, among others, are working in this direction. In Gradiant we are also investigating a model to collaborate in those first steps of the Digital Twin.

What is a Digital Twin?

The Digital Twin is a virtual representation of real entities, synchronised with a specific frequency and fidelity. From real-time and historical data, it is able to represent past and present scenarios and thus simulate future consequences using this information. In addition, it also allows the application of data analysis models or Machine Learning to provide answers to various functionalities. According to the literature written so far, digital twins are adapted to each use case and are powered by their own integration with the company’s systems. They are therefore made up of a huge amount of data, both from IT and OT systems, and are driven by domain knowledge.

However, the Digital Twin has a capacity for automatic action and modification on the entity’s physical asset that makes it a unique tool, unlike the other, more simplified concepts.

These virtual representations contain disparate information of a physical asset, such as its CAD models, real-time data of associated variables and their history, technical manuals or Machine Learning models used for various use cases (quality prediction, predictive maintenance, anomaly detection…), among other types of information. This is a more complex representation than a mere 3D model of a plant or a simulation tool, a simplification of the concept that is often given and that only represents a part of all the potential advantages of a complete Digital Twin. The figure below shows this idea represented schematically.

But for the Digital Twin to become a reality, it is necessary to start with a standardisation that allows access to all this information in an interoperable way between the different manufacturers or integrators. To this end, initiatives such as the Asset Administration Shell (AAS), promoted by the German Plattform Industrie 4.0, have been created to solve this problem and provide a layer of abstraction and digital representation of an industrial asset.

What is an asset?

An asset is any item that has value for the organisation, is individually managed and whose ownership could be transferred. Examples of assets from an industrial point of view are sensors, machines, lines or even an entire factory, but also products throughout their life cycle or software solutions such as an MES or ERP.

What is an Asset Administration Shell?

An Asset Administration Shell or AAS is a virtual representation of such an asset consisting of a series of sub-models, made up of various properties, in which all the information and functionalities of the asset are described. The following figure exemplifies the concept starting from an electrical axis as an asset, in which two examples of sub-models for specific functionalities can be seen with their associated properties: energy efficiency and positioning mode. 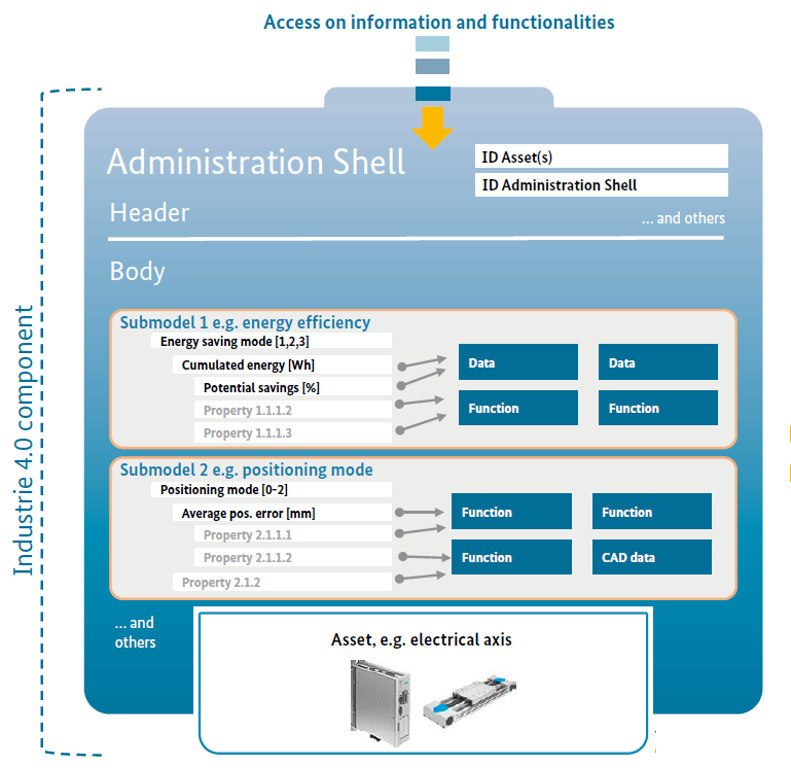 In addition to this virtual representation and modelling, the AAS also allows communication through standard interfaces and models, using technologies such as OPC-UA, AutomationML or REST APIs for interaction with each other or with external entities not modelled with AAS. This facilitates the interoperability of Digital Twins by means of open languages, understandable by all interested parties.

From the end user’s point of view, the adoption of a standard such as AAS offers several advantages compared to the current situation in the company. On the one hand, the creation of an interoperable digital twin greatly facilitates the dynamic reconfiguration of processes and communication between solutions from different manufacturers through the use of a common standard that is supported by major industrial figures such as Siemens, Bosch and Schneider Electric, among others. On the other hand, it allows to deploy on this interoperable environment countless value-added applications, as simple as a simple record of maintenance performed on a machine or access and storage of all related documentation, but also more complex, such as the simulation of new situations or the application of ML/IA models for cases of anomaly detection, predictive maintenance or optimisation.
In Gradiant we are analysing the incorporation of this standard and other technologies within our Fábrica Intelixente projects. An example of this work are Facendo 4.0 and Congals4.0.