Cardiovascular disease is the first cause of death in Spain. In 2006 caused nearly a third (32.5%) of all deaths. Atrial fibrillation is the most common cardiac arrhythmia. One in six heart strokes occur in patients with atrial fibrillation. The Spanish Cardiology Society estimates a 4.4% prevalence of atrial fibrillation among the Spanish population over 40 years. Due to the aging population, hospital admissions for this reason rised up to 66%.
Atrial fibrillation is usually diagnosed by an electrocardiogram. However, patient can very often have no symptoms and therefore, the illness go unnoticed to the eyes of the doctor. Unfortunately, it is often detected only during diagnosis of a patient who has already suffered an episode of stroke or neurological deficit, so early detection is vital when risk is so high.

Gradiant has presented the project results, along with the companies that are part of the project consortium, the Regional Minister of Economy and Industry, Francisco Conde; and the Executive Director of the Galician Innovation Agency (GAIN), Manuel Varela. The project is based on developing a tool using a non-invasive device for measuring heart activity, which allows constant monitoring of cardiac activity of patients and real-time monitoring for doctors, through a platform that uses WebRTC standard.

eHeart novelty compared to other systems, such as holters or implanted devices, is the use of miniaturized, cordless and non-intrusive devices. eHeart is usable, simple and comfortable for the patient; while powerful, fast and versatile for the specialists. 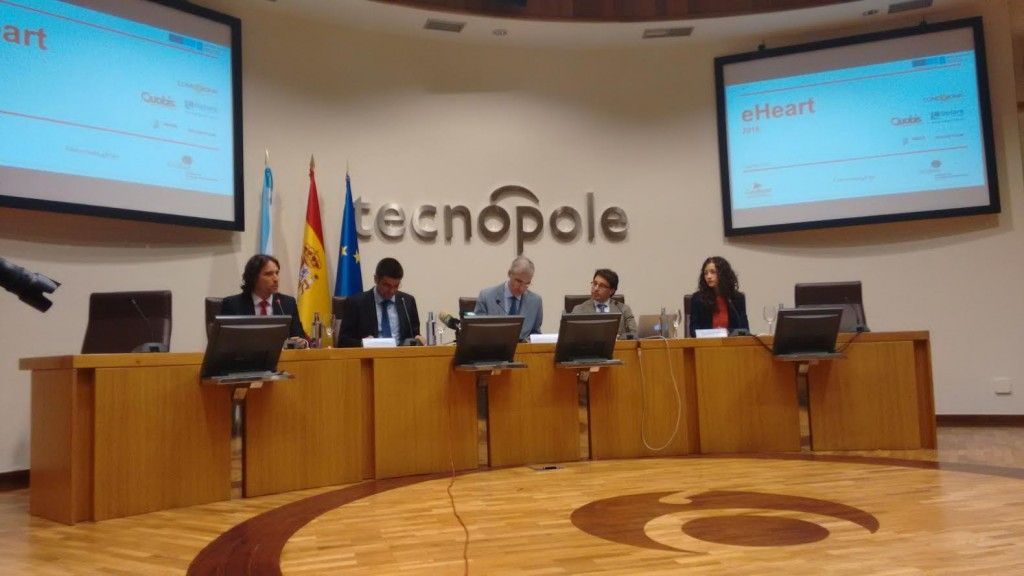 With the use of mobile devices and their processing capabilities, it is now possible to detect patterns of fibrillation in real time, speeding up the diagnostic process and, above all, allowing to save lives by acting quickly at the first signs of alarm.
The technology developed in Eheart allows the patient to be monitored continuously and comfortably. eHeart avoids the inconvenience of Holter devices, and above all, eHeart avoid the risks of implantable devices in the patient’s body, a much more expensive method.
In addition, eHeart can also monitor other relevant information, such as physical activity and respiratory rate.
eHeart allows the user to maintain augmented medical teleconsultation sessions without complicated devices or advanced configurations, and significantly improving handling confidential patient data.

During the presentation, Luis Pérez Freire, Executive Director at Gradiant, highlighted “Gradiant’s commitment to work for galician society and companies”. The Regional Minister of Economy and Industry noted also that “betting on R&D we can compete on international markets”
eHeart project was carried out by a consortium of Galician companies: CONEXIONA Telecom, Optare, Quobis, Hacce and Tecsoftcom, and has benefited from the technological support of Gradiant, and the scientific support from A Corunna’s Hospital Foundation.
eHeart has received funding from CONECTA PEME II program, managed by the Galician Innovation Agency (Ministry of Economy and Industry, Government of Galicia).