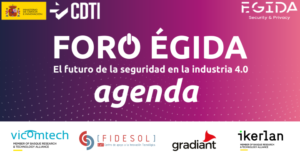 An event will be held to report on the progress of the initiative.

This Wednesday 22nd April at 12:00, a virtual event will take place under the title ÉGIDA Forum: the future of security in Industry 4.0, which will show the main advances developed in recent years in this area. The event will be based on the dissemination of the Cervera Network of Excellence in Security and Privacy Technologies, ÉGIDA, led by Gradiant and in which several leading national centres are working: Vicomtech and Ikerlan (Basque Country) and Fidesol (Andalusia), which is also in charge of the organization of this event.

The event will be attended by several of the professionals actively involved in the project, as well as the president of Fidesol, Luis Joyanes; the general director of CDTI, Javier Ponce Martínez; and the executive director of Gradiant, Luis Pérez Freire.

The director of ÉGIDA, Juan González (Gradiant) and the professionals from Fidesol, Vicomtech and Ikerlan involved in the project, will show the progress of the first year of life of this national alliance, to develop market-oriented research promoted by the Ministry of Science and Innovation and the Centre for Industrial Technological Development (CDTI).

There will still be time for a talk with the participation of Francisco Herrera, Professor of Artificial Intelligence at the University of Granada; Pedro García Teodoro, Professor of Telematics Engineering at the same university; Luis Márquez, Head of Infrastructures at Axesor; and José Francisco Muñoz, General Manager of Covirán.

The Cervera Programme for Technology Centres is the national commitment to develop market-oriented research promoted by the Ministry of Science and Innovation and the Centre for the Development of Industrial Technology (CDTI).