For quite some time, the term “Cloud Computing” or “cloud” appears again and again associated with the world of ICT. Indeed, despite appearances, this is not exactly a new technology, but with the development of a set of technologies already existent, among which we can highlight “virtualization” or “Grid Computing”, which have converged at a point which presents a paradigm shift. This change results in moving applications from users’ PCs to the “cloud” where they run with theoretically unlimited resources. The “Cloud” (or “Cloud”) is merely an infrastructure in which resources are virtualized to suit the application requirements dynamically. This allows better use of resources that will always be adjusted to demand and presents a new business model based on the “pay per use” (pay-as-you-go “). Another great advantage is the ability to access the service from anywhere at any time. We can find clear examples of these models in the online applications that Google offers, such as GMail or Google Docs. 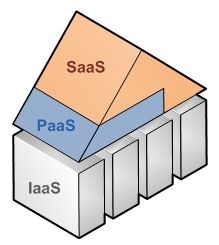 When we speak of “Cloud” we must always bear in mind two roles: the service users and providers of services. We can also group the services into three categories; the lowest level would have the Infrastructure as a Service (IAAS) that offers a set of resources (usually virtual machines) on which to run applications. Amazon with its famous EC2 is an example of IAAS provider. Then we’d have the Platform as a Service (PaaS) that is intended to provide an environment in which to run applications without having to worry about resources they may consume. Beneath a PaaS there always has to be an infrastructure to support it, though it would be transparent for the application programmer who uses the platform. Examples of PaaS would be Google App Engine and Microsoft Azure. Finally we would have the Software as a Service (SaaS), which aims to offer applications that can be executed directly on a platform or infrastructure that have the “illusion” to have unlimited resources for its implementation. This allows applications to scale dynamically based on demand without having to touch the code or application configuration. Zoho, Microsoft and Google, for example, offer computer suites in Software format as a Service.

The future of cloud computing is promising. On seeing the advantages, many companies are in the process of migration but the main problems are the difficulty of passing applications specific to the “cloud”, the insecurity that private data can be processed on external machines (something partly remediable with “clouds” private ) or reliance on service providers, apart from the Internet providers (availability becoming a critical parameter). At the pace in which cloud computing evolves and improves it is expected that in 3 years, 80% of CEOs will be using “cloud “technology.

Gradiant also bet on this new paradigm and has has projects like “Safecloud”, funded by the Galician regional government on safe “Cloud”.

ITBox, Gradiant technology for IT infrastructures

ITBox, Gradiant technology for IT infrastructures