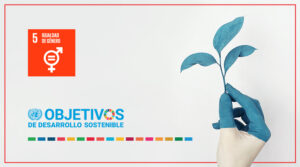 Several years ago, the United Nations set out a series of Sustainable Development Goals for the year 2030. In our attempt to demonstrate how technology is an essential ally to achieve many of them, in this case, and on the occasion of the celebration of International Women’s Day on 8 March, we want to explain how ICT will facilitate the achievement of SDG number 5: ‘Achieve gender equality and empower all women and girls’.

Thus, to address this objective from a technological point of view, two perspectives must be taken into account. Firstly, we must assume that technology already plays a predominant role in the world of work. That is, IT systems are increasingly influencing companies’ decision-making, also in terms of talent recruitment. This is why achieving feminist technology must be a priority when it comes to tackling the inequality in the workplace that women still face around the world.

On the other hand, detecting hate messages and hurtful comments towards this group, which makes up 50% of the world’s population, is a challenge that is difficult to achieve without the help of ICTs.

Some time ago, during a meeting, our colleagues recalled an anecdote that serves to explain how working on Explainable AI can contribute to making the world a fairer place.

This is the case of a Human Resources system that used Artificial Intelligence to offer the most suitable candidate for a given position in a company from a large number of profiles. The HR managers of the identity realised that all the candidates that the system offered for management positions met the same standards: they were male, middle-aged and with previous experience in the sector.

This was because the data that had been used to ‘train’ that AI system was poor and all the profiles of managers known to the system met those characteristics, so it assumed that being male and middle-aged was a prerequisite for fulfilling the duties of a manager.

The same happened with a Google AI system, which, while rating men as businessmen, associated women with purely aesthetic issues, such as beauty or smile.

This is why it is so important for anyone using such a system to understand how it works and its weaknesses, because in this way, when suspicious behaviour is detected, the reason for it can be deduced, and a solution to the bias that the system may be having can be found.

The other key function that is already being implemented through technology is the detection of sexist messages or biases on the web.

Education is one of the most important weapons in the fight against the machismo that is internalised in several generations. The adults of the future today spend a good part of their day on the Internet, consuming all kinds of content that is difficult to control.

At Gradiant we know that a good analysis of the net can make it a safer place for our young people, and educate them in values such as equality, feminism and respect for all human beings regardless of their sex, gender, race or social status.

The major Internet platforms are increasingly developing systems that detect hurtful or offensive messages. This is a technology that is already used to detect the well-known Fake News and that in the coming years could also be used to neutralise those who want to perpetuate the patriarchal system in which we live.

Nor should we forget the important work we are carrying out in the field of facial recognition and deep fake detection. A few months ago we talked about how women were being the main victims of DeepFake set-ups, a technology that in recent years has been widely used to fake pornographic videos with the image of its victims, mostly famous women.

For all these reasons, at Gradiant we are committed to an intelligent and supportive use of ICT, knowing its potential and bearing in mind the challenges facing society in the 21st century. We know that it is difficult and that ‘evil’ is often in the lead, but from here we are committed to continue working every day to make this world a fairer place for all human beings regardless of sex, gender, race or social status.