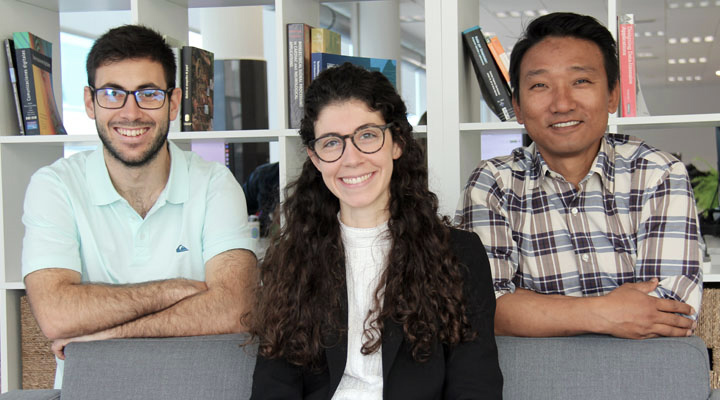 Quantum technology is one of the areas with the greatest potential for growth. Although its development and use is still in its incipient stage, the possibilities and solutions it will provide are still unimaginable. Andrea Rodríguez Blanco, head of quantum technologies at Gradiant, shares in this GRD Tech a very clarifying simile: just as in the 40s and 50s of the last century it was impossible to predict how the ENIAC (Electronic Numerical Integrator And Computer) computer would develop into today’s personal computers, it is very difficult to calculate the technological solutions that may arise from the development of quantum technology.

Nevertheless, research has begun to bear fruit. Examples are the results in measurement systems with quantum sensors or in cybersecurity and cryptography. These are the areas in which Gradiant is working and are related to its three main transversal research axes: connectivity, security and intelligence. Andrea Rodríguez explains that her department is developing projects with atomic sensors for advanced communications, providing greater precision and sensitivity, as well as algorithms for post-quantum cryptography, which help us to preserve our identity on the internet. In addition, the team is contributing to the use of hybrid classical-quantum algorithms to solve optimisation problems for planning tasks in the smart industry. The major challenges of quantum technology that our expert in this field points out are the development and improvement of hardware to be able to take advantage of all the possibilities of the technology.

In which areas is Gradiant putting its focus?

The development and inclusion of quantum technologies that we are following in Gradiant is, from the beginning, aligned to the three main areas of specialisation of the centre, which are: connectivity, security and intelligence. In response to the needs of these lines, we detected that the inclusion of technology that takes advantage of the properties of quantum systems could provide a competitive advantage in certain use cases with respect to the features offered by current technologies. In the field of communications, we highlight the projects we are carrying out with atomic sensors for ultra-wideband spectral monitoring. The importance of atom-based quantum sensors lies in three fundamental characteristics: versatility, universality and portability, the latter being even greater when working with them at room temperature. They can be used for multiple purposes; from electric and magnetic field measurements, terahertz imaging to their most established use case of atomic clocks. The response of atoms uniquely linked to fundamental physical constants means that atom-based quantum technologies can be used to define measurement standards.

In the field of security we find on the one hand the secure distribution of keys through quantum mechanisms (QKD) and, on the other hand, post-quantum cryptography, which is responsible for making encryption algorithms resistant to quantum computers. In this case, following the relevant role of the University of Vigo in the field of secure quantum communications, our goal is to extend the use case of our atomic sensors to that of quantum memories and thus provide at hardware level these devices that can help to extend the secure distribution of keys by optical fibre in the visible or in the telecom beyond 100-200 kilometres, which is where the current limit is.

Finally, on the intelligence axis, we seek to position ourselves more on the design and development of software that makes use of the advantages offered by quantum schemes. Several algorithms have been proposed that, taking advantage of the properties of quantum systems, allow us to solve problems more efficiently and even provide answers to others that cannot even be solved today with the most powerful computers. However, at present, quantum computers consist only of tens of quantum bits or qubits and are highly susceptible to noise. This is what is known in the quantum community as NISQ (Noisy Intermediate Sized Quantum) devices.

At Gradiant we seek to develop and implement hybrid classical-quantum algorithms in NISQ processors to solve problems of optimisation of planning tasks for Industry 4.0 and quantum machine learning for image classification and the detection and classification of communication signals.

What are the next challenges in the field of quantum technology?

For example, without the right hardware, purely quantum algorithms such as a Shor (exponentially faster prime number factorisation) or a Grover (searching for an element in an unordered list with a quadratic advantage) will have no impact. To achieve this, it is not enough to increase the number of qubits in quantum processors, but to increase the connectivity, i.e. the number of qubits that can be quantum entangled. We have to decrease error rates, increase coherence times, implement error correction techniques,… a set of experimental and technical improvements that allow us to implement the number of quantum logic gates that are necessary to execute an algorithm.

That is why in the short-medium term we are working on the development of hybrid classical-quantum processors and algorithms where current quantum platforms work as co-processors of classical orderings and the algorithms that are designed are not purely quantum, but are executed totally or partially on classical computers.

The quantum technology sector has capacity in Spain?

Yes, it does. In my opinion, it is true that we may have been a little late to catch the wave in some areas, such as the development of hardware for quantum computing. To tell the truth, I think there is always a lot of scepticism in Spain when it comes to investing in hardware for emerging technologies, which restricts us mostly to software development.

That said, one of the biggest strengths in Spain comes from software and the development of hybrid classical-quantum algorithms to accelerate applications in optimisation, artificial intelligence and machine learning. In this field, the number of initiatives and public-private funding has been increasing with projects such as Quantum Spain and CUCO, the latter subsidised by the CDTI.

What are the current applications of quantum technology?

Quantum technologies are usually classified into the following domains: quantum sensing and metrology, quantum communications, and quantum simulation and computing. In all of them, the use of properties such as quantum superposition, entanglement and interference are exploited to improve the capabilities of measurement systems, to transmit information more securely and to increase information processing capacity. Currently the most viable quantum technologies with the largest markets are those in the areas of quantum sensing and communications, such as time sensors, gravimeters, electromagnetic and inertial field sensors used extensively for navigation and positioning applications. Secure key distribution by fibre optics, air or satellite already provides a high level of security and is currently used in several countries in the public sector, at military and governmental level, as well as in the private sector. However, once quantum computing can be applied to solving real problems, it is expected to have the highest annual growth rate compared to all other quantum technologies.

Do we know how far-reaching quantum technologies can be?

I don’t think we are yet able to predict the full scope of quantum technologies and the problems that can be solved with them. It is as if we go back to the 1940s and 1950s with the first machines like the ENIAC, designed for the numerical resolution of ballistic problems, which occupied a surface area of 167 square metres and weighed 27 tonnes. Forty years later we started to have the first personal computers and mobile phones. We would not have been able to think in 1947 how these machines would change our lives. Personally, I don’t know if quantum technologies can have a similar impact on our lives as classical computing did, but I do believe that they will help us solve certain problems that would be impossible to solve without taking advantage of the quantum properties of nature.

What trends in quantum technology will we see in the coming year?

I think this year will see major advances in the scope of QKD and the quantum internet and their application areas. Currently these quantum communication paths are mostly limited to metropolitan areas due to the losses that photons suffer over distance.  This is why new prototypes of quantum memories and quantum repeaters are expected to improve the infrastructure for a more robust quantum internet. On the other hand, I believe that quantum cryptographic systems for data protection will continue to expand in various fields, and progress will be made in the miniaturisation of hardware for QKD systems and quantum random number generation (QRNG) and their integration in integrated circuits that allow them to be installed in common devices. On the computing side, it is expected to increase its use through the cloud as Software as a Service (QUSaaS) and to continue working on the development of quantum algorithms for optimisation, quantum machine learning and new materials.

In terms of sensing, quantum sensors will appear with higher sensitivity and/or for more use cases; for positioning systems that do not rely on GPS and for monitoring a larger number of environmental parameters.