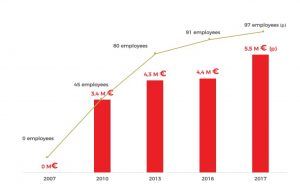 Evolution of sales and professional numbers Gradiant – Own preparation

Gradiant has reached 18.6 million euros in innovation sales to 161 companies in 8 years of operation. The Technology Centre of Telecommunications of Galicia, which headquarters are in Vigo, concentrates 55% of its turnover in private companies, with clients and partners spread in 24 countries. In 2016 the R&D&I foundation achieved a record international income that represents 21% of its turnover.

USA and the UK are the two major international markets for Gradiant’s developments. A UK-based health and safety firm has just begun testing LifeSensor, an innovation that prevents the deaths of people indoors. The project began its testing phase in police custody cells this year.

Gradiant’s LifeSensor allows to monitor patients’ breathing rhythm and movement non-invasively, optimizing the surveillance from a radar system that detects the existence or absence of breathing.

The device has alarms in real time to warn of any significant interruption of breathing and control at all time the state of a patient who has difficulties to be monitored. LifeSensor is specially designed to monitor people in a state of vulnerability, such as patients in psychiatric and geriatric units, but also to control other processes such as sleep apnea.

The radiofrequency technology used has a detection range of up to six meters, even through materials like clothing or sheets, but also wood, stone or cement. Embedded in drones, LifeSensor could extend its capabilities to other areas such as search and rescue of survivors in natural catastrophes.

During the last eight years Gradiant has developed 249 different R&D&I projects, becoming one of Galicia’s main innovation source. LifeSensor joins other solutions of the centre used in the business world. Gradiant’s technology is used in an array of areas such as the online banking app of one of Spain’s largest banks or cybersecurity, with the recent sale of its document traceability system to Eleven Paths, Telefónica’s cybersecurity unit.

Gradiant is a private non-profit foundation that aims to develop new telecommunications systems in the areas of connectivity, intelligence and security. The centre employees 91 people and has registered 11 patents. In 2016, Gradiant’s turnover raised to 4.4 million, expecting to exceed 5.5 million in 2017.