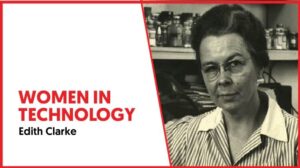 In our effort to bring to light all those women who throughout history have contributed to scientific progress by overcoming the canons of each era, today we present a new edition of Women Technologists. On this occasion, the protagonist will be a woman who, at the beginning of the last century, decided to devote herself to her passion, whatever the cost, Edith Clarke.

Who was Edith Clarke?

Born in 1883 in Maryland (United States), she was orphaned at the age of 12 and raised by her older sister. Although it would have been more usual to find a husband as soon as possible to support her and allow her to have a stable life, Calrke decided to use her parents’ inheritance to go to university, where she studied mathematics and astronomy.

Although she graduated in 1908, her involvement in study and research enabled her to return to the university in 1947, this time as a lecturer.

However, the road to becoming a professor was not an easy one. The society of the early 20th century did not accept that a woman could hold positions of responsibility, so at first she had to settle for a position in the engineering department of the then young General Electric.

During this time, Edith did not waste her potential and registered a patent for a device that would be key to her consolidation as a technologist, although it would take several years for this recognition to be noticed.

She invented a calculator that could solve equations involving variables such as electrical current or impedance. In addition, the ‘Clarke Calculator’ made it possible to solve problems at a much faster speed than other devices of this type.

Among her many accomplishments is that she was the first woman to present a scientific paper at the Annual Meeting of the American Institute of Electrical Engineers. In addition, she was also a pioneering woman to achieve a professional position in the Tau Beta Pi Engineering Honor Society and the first woman to teach electrical engineering at the University of Texas.

Despite all that she achieved, during her 76 years of life, Edith Clarke had hardly any media relevance, something that clashed with a time when, due to the political tension between the great powers of the time, scientific knowledge was used as a propaganda weapon. Not even in this favourable context for science did Clarke have a chance to make his full potential known.

It was not until 2005, almost half a century after her death, that she was inducted into the Inventors Hall of Fame of the United States of America.