Skip to content
Home > Noticias > The revolution of 3D sensors in consumer electronics
In the interest of searching for more natural and intuitive methods of interaction, human-computer interfaces have experienced a great progress over the last decade, progressively reaching consumer electronics. Nintendo Wii revolutionized the video game industry with a wireless controller equipped with accelerometers and IR receivers that makes a more intuitive control possible. Sony also has joined this race to achieve more natural and intuitive control methods (with applications for PS3 like the EyePet). But, above all else, Microsoft Kinect for Xbox 360 stands out as the last word in advanced interaction. With Kinect, the human body itself becomes the controller, which is achieved by modeling the player’s actions (arms, legs, position) and by using depth sensors. In order to attain this objective, Microsoft opts for the technology developed by  PrimeSense, an Israeli company founded in 2005. Despite being probably the most popular, PrimeSense is not the only company in the sector of natural interfaces. There are other companies like SoftKinetic, Omek, GestureTek or Mgestyk. 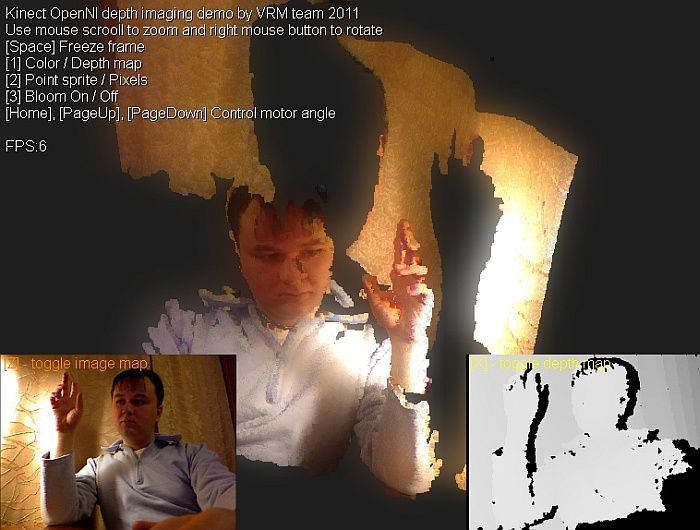 Just after its release, a mass of developers flooded the Internet with multitud de “hacks” realizados sobre Kinect. . These hacks are applications which use the Kinect beyond the environment the system was initially designed for. That is, they use the Kinect connected to a standard PC. The developer community needed  to create their own drivers in order to access the data provided by the Kinect sensors. This avalanche of creativity took Microsoft by surprise, since it had not foreseen the magnitude of this response. Last June Microsoft decided to launch “Kinect for Windows SDK Beta”, a software development kit that makes it easier to programmers to create new applications for Kinect on computers using Windows 7. However, skeptical voices have appeared that, although they approve the decision taken by Microsoft, they consider the use terms are still too restrictive. Terms of use establish that the SDK Beta is licensed for non-commercial use only. Furthermore, Microsoft policy does not allow for the moment access the Kinect by channels other than the provided by the SDK Beta. Microsoft is expected to release a commercial SDK, but its scope and availability have not been announced yet.

Meanwhile, other alternatives are beginning to materialize in the market. Recently, Asus has launched the Xtion platform in collaboration with PrimeSense, This platform and the Kinect one have several characteristics in common, but Xtion has been oriented to multimedia control instead of gaming. Its compatibility with the OpenNI interface makes it a project with open source vocation. Xtion was born from the beginning indeed as a platform for letting developers programming their own applications. Asus announced, moreover, the opening of an on-line applications store where developers may put their creations for sale.

Undoubtedly, the most recent movements we are aware of in this sector point out to enable new market opportunities, whose business models are yet to be explored. We have to keep our eyes open to see how things will develop, because it seems clear that we are witnessing another little revolution in the IT industry.