Skip to content
Home > Noticias > The Present and future of the coaxial cable
Currently, within the various guided media that support the deployment of data networks, one of the best known and most prominence is the coaxial cable. This cable, being a regular in our homes today, has turned out to be an inseparable partner of development and infrastructure deployment of television reception in the last decades. Looking back, the original expansion is linked to the sellers of U.S. satellite television and cable who saw it as a way to improve reception in rural areas. The evolution of its use went through various significant stages, as were the beginning of the generation of specific content for distribution on this medium and its combined use with satellite transmission. Currently, the use of coaxial hybrid networks, HFC, has reached a level of maturity which results in the integration of services beyond television, including the triad of telephone, television and broadband Internet. 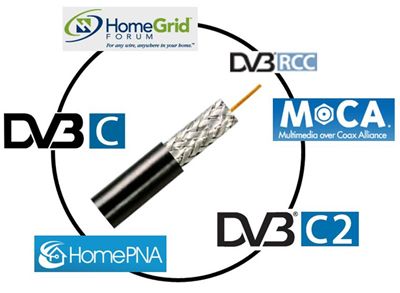 The evolution went through various significant stages as were the beginning of the generation of specific content for distribution on this medium and its combined use with satellite transmission. At present, the use of coaxial hybrid networks, HFC, has reached a level of maturity which results in the integration of services beyond television, including the triad of telephone, television and broadband Internet.

The improvements made by the use of coaxial cable have always been supported by the initiatives undertaken by various entities that have been committed to develop technical standards giving the necessary support to the demands that gradually came up. One of the main standards with the most development to date is the DVB-C (Digital Video Broadcasting – Coaxial) developed within the DVB Project, an organization characterized by the promotion of internationally accepted standards for digital television. Among the most important technical features of this standard is notably the use of mono-carrier modulation with QAM constellations in densities ranging from 16 to 256 symbols using channel coding combined with Reed-Solomon convolutional shuffling.

For many years, the use pattern of coaxial networks remained virtually unchanged, with the end user intended only as a consumer of information. This framework operation began to suffer from progressive changes associated with two new realities: first, users not only wanted to watch TV, but with the improvement of Internet, also wished to receive data and second, new services began to appear which required a return channel that would provide capacity for interaction with the user. Given these requirements, standardized initiatives soon arose like DAVIC or DVB-RCC which tried to cover such needs, and were later overtaken by DOCSIS. DOCSIS was originally developed by CableLabs in the United States, emerging as the standard that truly set the foundations of a system directed to transfer data both downstream and upstream over the already existing HFC network infrastructure hybrid.

Today, the profile of use of HFC networks continues to evolve so that, for example, the present occupation of the channel is mainly intended to decrease the transmission of analog TV channels and standard definition digital channels, however in some countries high-definition television has already made way. In the next years its role will be emphasized, along with the demand of video and data communications (Internet) mainly. Given this forecast, the need for higher bandwidth is evident, resulting in the fact that they need to increase existing capacity of networks to handle the future demand, both in the downstream channel as in the return. In addition, other technologies such as DSL and wireless are undergoing major changes that are likely .in the short and long term, to be a threat cable operators markets, forcing an effort in the evolution of cable technology.

The actors involved in the HFC network sector weighing out different technological options for improving their networks, among which include the segmentation of the network, the digitalization of television transmission, the extension of frequency band operating up to 1GHz and beyond, more efficient modulation, statistical multiplexing, performance gains ( for example, losses and distortion,) of the network components, etc.. In this regard, there have been various international responses: first, CableLabs published in 2006 the final specifications of DOCSIS 3.0, characterized by, among other things, the novel technique of Channel Bonding for increasing the bit rate available based on the use of more than one physical channel for transmitting simultaneous use of the information, which at the MAC layer should be distributed efficiently among the various physical channels available. This technique can achieve rates up to about 400 Mbits / s (EuroDOCSIS) in the channel downstream and 120 Mbit / s in return. On the other hand, there’s the European initiative Redesign whose main objective is the development of new technologies and technology strategies that enable cable operators to migrate their networks and infrastructure of broadband communication in the most efficient and cost effective. As a result of this, the new DVB-C2, was published in 2009 which long exceeds the capabilities of its predecessor. At the technological level, DVB-C2 is characterized mainly by the jump from mono-carrier to COFDM, with constellations that can reach up to 4096 symbols and even higher bandwidths to 8MHz, in addition to using channel coding based on the combined use of codes BCH and LDPC. The improvement in the standards must be accompanied by a gradual improvement in the devices that are deployed networks, reducing the attenuation associated with them as the wiring, as well as reducing the level of distortion generated by the amplifiers in the network. At all times, we must not forget that increased bandwidth available for the return channel is a challenge still unresolved and must continue to be investigated in the coming years.

The progress of the technologies associated to coaxial cable has led to other standards, focusing on the deployment of local networks in the home leveraging existing infrastructure. It is, for example, the case of MoCA, standard developed by the Multimedia Coax Alliance, which aims to make the most of unused spectrum areas in interior home networks for the deployment of local networks that allow communication between multiple devices connected to the same, reaching rates of up to 270 Mbits / s. The technology is based on OFDM MoCA with up to 256QAM constellations and Reed-Solomon channel coding, and a specialized MAC layer that allows the coexistence of multiple independent networks through non-overlapping RF channels.

Gradiant is currently working in several lines of research that seek to further improve the efficient use of the coaxial resource , as well as the search for alternatives to overcome the current technological limitations to which its use is subjected.