Skip to content
Home > Noticias > The path to 5G

Mobile operators are now ready to offer connectivity with the new technology known as LTE (Long Term Evolution) or, erroneously, 4G. Actually, mobile users will have to wait a few years more before getting the proper benefits of the 4th mobile generation, known as “LTE Advanced” (LTE-A) which can theoretically achieve peak data rates up to 3Gbits per second for download and 1.5 Gbits per second for upload (source: http://www.3gpp.org/technologies/keywords-acronyms/97-lte-advanced).

Meanwhile, scientific communities, industries and public sectors worldwide are trying to figure out which will be the scenario in the next ten years and are setting up new requirements that have to be faced by next mobile generation. Ultra high resolution video, tactile internet which requires very fast response less than 1ms, or ultra connected environments where huge number of things continuously exchange information (Internet of Things), are some of the future scenarios that will require a reshaping of the communication infrastructures.
Among the objectives identified by European initiatives such as the 5G Public Private Partnership (5G PPP, http://5g-ppp), to enable the communications of the next decade, there are:
– Providing 1000 times higher wireless area capacity and more varied service capabilities compared to 2010.
– Facilitating very dense deployments of wireless communication links to connect over 7 trillion wireless devices serving over 7 billion people.
– End-to-end latency < 1ms
These objectives can be achieved by exploring higher frequency bands up to 90GHz (millimetre waves) and more flexible use of the spectrum integrated with cognitive radio technology. In addition, new flexible waveforms are being proposed as enabler of 5G infrastructures such as Filter Bank Multicarrier (FBMC), Generalized Frequency Division Multiplexing (GFDM) or Universal Filtered Multicarrier (UFMC). These waveforms can be seen as an evolution of the Orthogonal Frequency Division Multiplexing (OFDM) which is the base of 4G air interface.
They all have better spectral confinement than OFDM and they are less sensitive to carrier frequency offset which make them an appealing alternative for a better spectrum usage, asynchronous scenarios (Machine to Machine) and multiuser uplink communications.
The path towards 5G has just begun and a lot of research activity is foreseen during the next years. In the context of the BATS project (http://www.batsproject.eu), Gradiant is studying the possibility to use 5G waveforms over satellite for future integrated networks [1, 2]. Gradiant is also a member of the Networld2020 European platform, actively contributing to white papers of the 5G PPP and it was also present with the “Next Generation Satellite Broadband Systems” stand at the EUCNC’14 conference in Bologna (June 24-26) where Visions and Opportunities of 5G PPP were presented 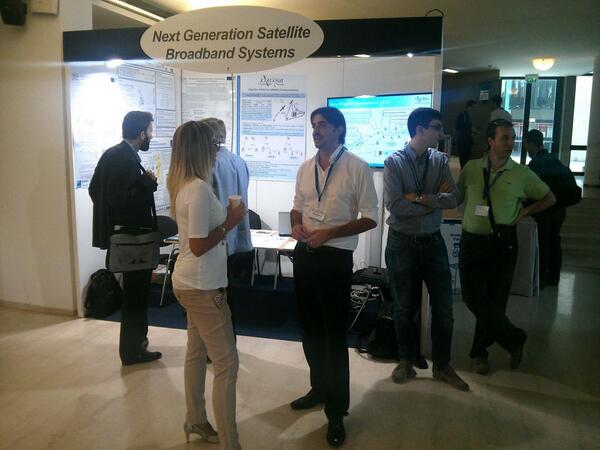