Skip to content
Home > Noticias > “+QUE_MAR”
Regarding the celebration of Xacobeo 2010, which is a boost for Galician tourism, it is evident that the relation between the Way of St. James and navigation tourism has not been adequately exploited so far. This is certainly curious, since one of the major tourism assets in Galicia is its coast, and the Jacobean tradition is strongly linked to the sea.

The so known “Route of the Arousa sea and the Ulla river” follows the path which, according to legend, took the sarcophagus carrying the body of Apostle St. James, from the entrance of Arousa Bay to Padrón, then upriver the Ulla, and finally along the last stage of the Portuguese way to Compostela. 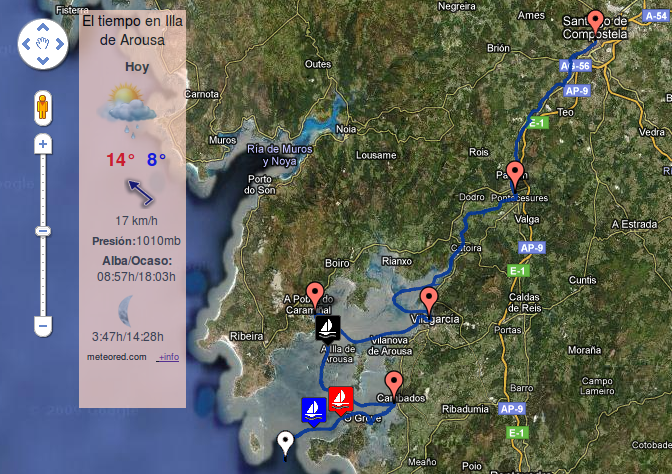 Due to these facts and promoting the relationship between the St. James way and the sea, Gradiant, funded by Xunta de Galicia, Spain, launched the “+QUE_MAR” project. This project aims to provide support to pilgrims who wish to follow the route by sail. It consists of a platform that helps pilgrims along the route, where they can find tourist information and share their experience. The platform is based on a social network where pilgrims may exchange their opinions, share photos or contribute to the platform by providing information they consider relevant.

In addition to these features a position monitoring system for mobile devices is available to the users. It displays their position in real time on a path superimposed on a image of the coast, as well as those of their friends in the social network. We employ the recent W3C specification for mobile geolocation (February 2010), which does not require any additional applications but the browser itself. It also provides support for timing, including rankings with the best times.

On the other hand, for those users who cannot follow the route “in situ “, the platform also offers has a simple game that allows them to travel with a virtual boat.

Project “+QUE_MAR” lies a bridge between Jacobean and nautical tourism. Its platform allows to create virtual shipping lanes and monitor of the pilgrims in the Route of the Arousa Sea and the River Ulla. It will help tourists to enjoy sailing and all other activities of the Jacobean Year, such as accomplishing the Saint James Way.