In recent years, multimedia services have changed dramatically. For most of our lives there was only one way to access each service and, conversely, just one device could serve it. This way, we watched television in televisions, surfed the web and ran applications on PCs, listened to the radio in hi-fi equipment and used the phone to talk. Nowadays, then trend is towards convergence of those devices and the services they support. This way, we can enjoy any service from any device.

A wide range of agents are involved in this change: content providers, which have to adapt their contents; users, who are becoming much more demanding; and manufacturs, which have to develop new appliances to fit these new requirements. 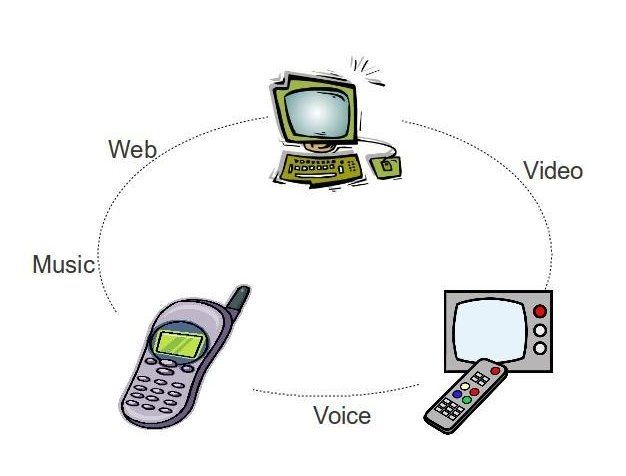 The border between classical broadcasting services and stored media is, nowadays, more diffuse than ever. Television companies offer their broadcasting services as video on demand services. This way, enjoying your favourite TV show at a given time is no longer mandatory. Apart from that, online videoclubs and Internet services such as Youtube or Vimeo are becoming very popular. Because of this new trend, stored media, such as DVD or even Blu-Ray, are falling into oblivion. Related to the latter, we could say that, even though it is a very high quality product from a technological point of view, it is totally disconnected from the Cloud.

Access to cloud services has a strong involvement: the TVs need an Internet connection. Only computers were expected to fulfil this requirement until recently. So, another convergence has appeared: TV and computers offers the same services. Taking into account that TV tuner cards are inexpensive, this assertion is even stronger.

The cell phone world is also experimenting a big change: from voice and text communications devices to very powerful ones to the extend that the can execute computer-like applications. Thus, mobile phones are ready for displaying multimedia contents. In addition, in the other direction this change has also taken place: due the proliferation of VoIP communication, telephony is also available in connected TVs.

Adapting appliances to these new requirements is a major goal for manufacturers, who have oriented their efforts to developing new software and hardware platforms. Related to the former, it is very interesting to see how top companies, such as Intel, Nokia or Google, have become important actors within the free software world. As a result of this, projects like Webkit, Android, MeeGo or XBMC/Boxee are key pieces in this scenario.

Convergence is already present in the market. Manufacturers such as Google, Apple or the Galician company Blusens, have announced their GoogleTV, AppleTV and WebTV devices.

Gradiant is also aware of this trend. We are deeply involved in the development of new multimodal interfaces, video transmission technologies or new hardware platforms.