Human motion tracking has become a hot research topic in the human-computer interaction field due to its wide range of applications and the Micro-Electro-Mechanical Systems (MEMS) technology development yielding to small and cheap motion sensors. The most typical applications nowadays are in virtual reality, e.g. videogames. For example, the Ninetendo Wii, Microsoft Xbox 360, and Sony PlayStation 3 platforms have all motion tracking-based games. According to a survey from VGChartz (http://news.vgchartz.com/news.php?id=6307), the total sales of these three products are about 60, 28 and 29 millions of consoles for the past three years. These numbers are expected to rise as new videogames appear. 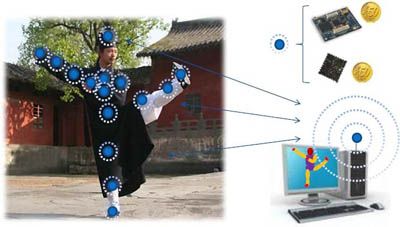 Besides the game applications, human motion tracking is a promising technique for remote nursing and rehabilitation. With this technique, the patient at home might be nursed or helped by a remote doctor through the Internet with a real-time interaction. The patient can do at home some exercises as required by the doctor. In a remote terminal the doctor might diagnose and give some suggestions based on the patient’s real time motion rendering. Thus it brings great convenience for the patient. Other applications can be found in theatre performing, movie making and sports training. In the theatre, an intelligent spotlight can track the actor’s movement on the stage in real time. In movie making, a computer generated avatar imitates the movements of a human model using the motion tracking technique. In sport training, such as golf learning, motion tracking techniques will be helpful to correct posture and movement errors. In addition, the motion tracking technique can be used for controlling a robot in dangerous environments. For example, in space exploration, a remote robot can imitate the human motion to perform equipment checking, maintenance and repairing.

According to the biomechanics, the human body can be divided into at least 15 independent parts such as head, torso-clavicle region, abdomen-hips region, upper legs, lower legs, feet, upper arms, lower arms and hands. Each part is modeled as a rigid body. Thus the human motion can be captured by tracking the positions of each independent rigid body. To determine each rigid body’s position in 3D space, two metrics are concerned: orientation and displacement. The orientation might be deduced from the rotations such as roll, pitch and yaw, while the displacement is a relative distance to the base point. For example, if the torso-clavicle region is taken as the base point, all the other rigid bodies’ displacements can be decided according to their orientations and lengths. Therefore the critical function for rigid body tracking is to decide the orientation.

To track the human motion, there are several mechanisms, such as mechanical tracking, magnetic tracking, video tracking, optical tracking, and inertial/magnetic tracking systems. Each of those mechanisms has advantages, but also suffers from shortcomings. The mechanical tracking is accurate but it is cumbersome, making the movements inflexible. The magnetic tracking is more flexible, but it is easily interfered by surrounding metallic objects. The video and optical tracking is flexible, but it requires enough light and several cameras set up around the scenario where the tracked object is tagged. The recent development of MEMS sensors overcomes most of the above constraints by attaching the sensors to the tracked body. MEMS technology enables the creation of very small electromechanical devices using semiconductor fabrication techniques. A MEMS 3-axis gyroscope is a flexible inertial device to detect rotation in 3D space by measuring angular rate, but it has an inherent drifting problem, which limits its usage independently. To combat it, a 3-axis accelerometer and a 3-axis magnetometer are complementarily used. The accelerometer works based on the Newton´s second law (F=ma, where F is the force, m is the mass, and a is the acceleration). In the steady or quasi-steady conditions, the output might be approximated by the gravity, thus it is possible to use a 3-axis accelerometer for the inclination estimation. However, it is not possible to implement the azimuth estimation using the same 3-axis accelerometer, thus a 3-axis magnetometer should be added, which works measuring the earth magnetic field direction.

Although the MEMS inertial/magnetic sensors are promising for rigid body tracking, for the human motion tracking, more than 15 embedded nodes are required, each including a 3-axis accelerometer, a 3-axis magnetometer and a 3-axis gyroscope. Thus, communications will be another challenge, with the consideration of real time and reliability for these embedded nodes. Moreover, to overcome the constraints from wire connections, wireless communication technologies such as bluetooth, WiFi or ZigBee would be preferred, which will arise other problems, like synchronization, collisions, radio channel fading, etc. Furthermore, the real time sampling, data fusion algorithms and battery-powered nature of the nodes will set the constraints of the embedded processor and real time operating system performance and power efficiency required for a usable system.

Currently Gradiant is working in several lines of research that seek to further improve the motion tracking techniques with inertial/magnetic MEMS sensors based on wireless communication technologies, as well as the search for combining those sensors with cameras to overcome the current technological limitations in each of the technologies subjected.