In the last years, there is an increasing demand of service heterogeneity in cell telephony. Typically these services are highly resource-consuming and their deployment implies the need to improve the equipment of core and access networks. 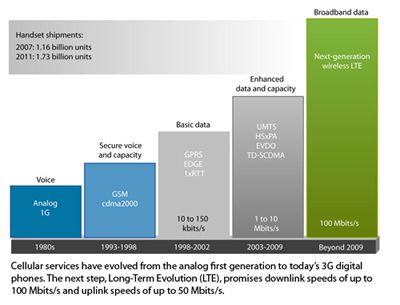 This evolution is crucial for 3G networks. Ubiquity and improvements in business models of voice and data services demand a more flexible scenario, where handheld terminals and laptops access the network everywhere at anytime. Indeed, mobile operators offer mobile connectivity in home when wired network is unavailable, at no extra cost.

Mobile access networks are bandwidth-constrained. Thus, new technologies must be devised to cope with the increasing traffic demand of heterogeneous services. Until recently, two proposals have been competing to enable mobile broadband IP access, WiMAX and LTE (Long Term Evolution), but WiMAX is losing momentum. LTE is the natural evolution of 3G and 3.5G Networks. In LTE, all applications run over IP, favoring service integration in mobility scenarios and soft handover among different radio technologies. In comparison with HSPA (3G), LTE introduces physical, link and structural changes. LTE is based on OFDMA in the downlink, which is more efficient spectrally and reduces the cost per bit. In the uplink, a variant of OFDM, which reduces the power consumption of user terminals, is used instead. LTE eliminates nodes of the actual 3G network architecture and upgrades the rest, taking retransmissions closer to the radio layer and simplifying handover. Hence, transport delay is greatly reduced, which favors delay-sensitive protocols as TCP.

The changes that are needed for a LTE deployment over current 3G networks are relatively few. Moreover, these changes could be applied gradually. This feature converts LTE into the technology of choice for actual 3GPP and 3GPP2 operators and mobile manufacturers. In parallel to LTE, HSPA is evolving to guarantee peak capacity to users with good channel conditions. HSPA network operators need to face the decision of adopting HSPA+ as a first step or getting to LTE directly, which would bring more benefits in the long term. Manufacturers as Huawei and Samsung are developing chips with hybrid s LTE/GSMolutions for the first LTE networks in Sweden.