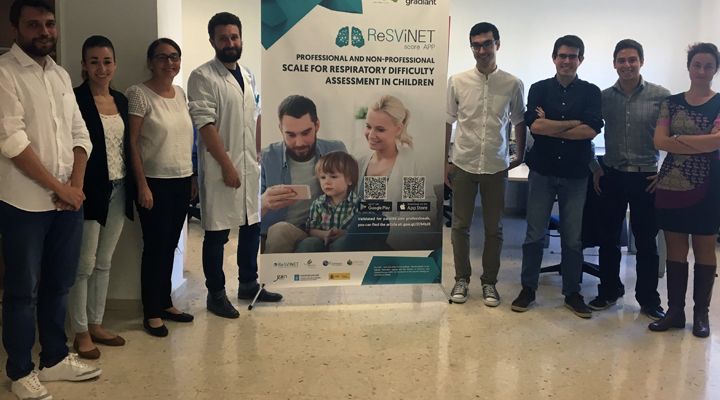 The application, developed by Gradiant, was officially presented at the International Congress of Respiratory Syncytial Virus recently held in Malaga, Spain.

ReSViNET is the name of the scale created by the GENVIP Group (Genetics, Vaccines, Infections and Paediatrics Group) of the University Hospital of Santiago, and the European network ReSViNET

The paediatricians of the recently presented at the International Congress of Respiratory Syncytial Virus, held in Malaga, the mobile application ReSViNET Scale App, an application for iOS and Android devices that allows parents to assess acute respiratory distress in a way that can compare to that of a paediatrician.

The ReSViNET scale, which gives the name to the new application, is a clinical evaluation tool that aims to facilitate the communication between doctors and patients. It was developed by groups GENVIP (Group of Genetics, Vaccines, Infections and Paediatrics) of the Clinical Hospital of Santiago, REGALIP (Galician Network of Paediatric Research) and of the European Network ReSViNET coordinated by Federico Martinón, head of the Paediatrics department, coordinator of GENVIP and REGALIP, and member of ReSVInet, and Antonio Justicia, a paediatrician member of the GENVIP group. The application that implements the scale was developed by the technology centre GRADIANT, and it was financially supported by the Innovation Agency of Galicia and the Ministry of Economy and Competitiveness, within the framework of the Spanish Innovation Strategy in Galicia.

The scale was scientifically validated by the professionals of the Department of Paediatrics of the Integrated Management Unit of Santiago with the help of parents who evaluated the clinical status of their children, under two years, admitted for respiratory distress (mainly acute bronchiolitis. In addition, the results of its application in Primary Care in children of any age presenting with acute respiratory distress of any origin have been presented in several conferences. To this date, no other scale has been validated for the assessment of acute respiratory difficulty in children presenting in the Primary Care setting, where respiratory symptoms may amount to 2/3 of the complaints at certain times of the year.

Validated for both, parents and professionals

“Although the concept dates back more than 40 years, validation is a procedure that has been incorporated relatively recently in the construction of clinical scales”, explains Antonio Justicia, a paediatrician who is pursuing a PhD in respiratory scale validation. “We are all aware that clinical evaluation is a very subjective process, and that even professionals with years of experience may differ in their conclusions after performing a clinical examination on the same patient.” The validation process allows us to discern if the results obtained by two researchers who use the same scale are comparable or not, or if the change in the result translates into some kind of change in the clinical condition, or if it can be combined with another scale that uses different parameters… That is, the validation of a scale informs us how objective the measure we have obtained could be”.

The paediatrician Antonio Justicia, under the direction of the physician Federico Martinón-Torres, has recently published a review of these types of scales, also called scores, which shows that the ReSViNET scale is the most widely validated to date. In the same scientific article, he concludes that the ReSViNET scale is the only one that can be used by parents, all others are aimed at health professionals. Even now, there is no validated scale for the evaluation of respiratory distress of children in Primary Care. According to Martinón-Torres, “Making a common evaluation method available, we can achieve greater involvement of the parents in the management of the disease, and doctors can have taken-at-home records that facilitates the follow-up and evaluation of the child’s response to treatment.” He adds that “the application of a scale is not only beneficial for the day-to-day of the clinical care for the aforementioned reasons, but also in medical research, and more specifically in clinical trials, as they require close and regulated monitoring of the subjects by doctors, nurses and parents. The proof of its usefulness is that it is already being used by different promoters as a reference scale”.

Since the end of October of this year, the application developed by the technology centre GRADIANT, is available for iOS and Android mobile phones, which allows the application of the scale, both by health professionals and parents, who may use one of its versions: the “quick” version for those who are already familiar with the scale, and a “step-by-step” version implemented by a set of questions. In addition, the app allows the storage of results with annotations and comments for subsequent consultations, as well as the association, by professionals, of various biomedical parameters.

Louis Bont, the paediatrician that leads the group dedicated to the research of Respiratory Syncytial Virus at the University of Utrecht and the coordinator of the ReSViNET network, summarizes, the importance of the new scale: “Scores to assess breathing problems were designed for hospital use, aimed at health professionals and are limited to one or two specific pathologies. With the ReSViNET scale, parents are offered a tool that, until now, was unavailable for them, and which is valid for all health care levels, not just for the hospital, whatever the cause of the respiratory distress.

This paediatrician, along with those of the University Hospital of Santiago de Compostela and dozens of paediatricians from all over Europe, will participate in the next step of the development of the ReSViNET, which will lead to the application of the ReSVinet Scale to more than 10,000 children throughout Europe, following the directives of the RESCEU project. With the app already available, it is a process that can be carried out systematically, and is also offered to parents and paediatricians outside the project.