Gradiant’s CEO and holder of the Prince of Asturias professorship in Science and Information Technology, Fernando Perez Gonzalez, received on 5th October, an official visit from, Their Royal Highnesses Prince and Princess of Asturias at the University of New Mexico (UNM). Prince Felipe presided over the meeting of the Advisory Committee Chair, in which, besides Princess Letizia, , David Schmidly, President of the UNM, Jorge Dezcallar, Ambassador of Spain in America, Angel Lossada Secretary of State for Foreign Affairs and José Manuel Fernández de Labastida, General Director of Science Policy, among others, were present. 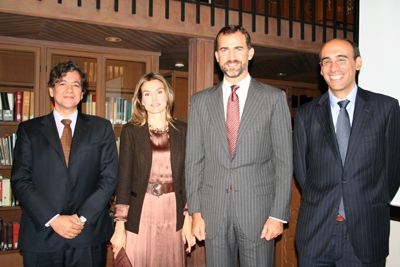 The meeting served to witness the passing of former title holder, Professor Manuel Hermenegildo, professor at the Polytechnic University of Madrid, to Professor Pérez González. Professor Hermenegildo summarized the achievements made during the six years of his the professorship, including the direction of three doctoral thesis funded by the UNM, numerous research articles and several inter-university agreements. For his part, Fernando Perez stressed that procedures for the selection of two of the three PhD students, which will be funded by the UNM, have already begun and that three research projects with Professors Heileman, Crandall and Jayaweera, have also commenced on issues related to the forensic analysis of information, anonymous network like Tor and dynamic hire spectrum, respectively.

His Highness congratulated both professors for their brilliant curriculums and showed interest in the newly opened areas of research, in particular the possibility that investigations in anonymous networks may serve to combat illegal servers that hide behind these networks.
After the Advisory Committee meeting, the Dean of the UNM held a reception at which attendees were able to socialize informally with their Highnesses and other authorities. Then the Prince and Princess travelled upstate, where they were greeted by Governor Bill Richardson and participated in events celebrating the 400th anniversary of the capital city, founded in 1515 by Spanish explorers.