From September 1st Fernando Perez is in Albuquerque, occupying the Prince of Asturias professorship in Information Technology at the University of New Mexico. This professorship is the only one to be named after Prince Philip, in the Field of Technology.

After a nationwide selection process, Fernando Perez, CEO of Gradiant, was elected head of the Prince of Asturias professorship in Science and Information Technology, sponsored by Fundación Iberdrola which has the support of the U.S Embassy in Spain and the Royal Household. His outstanding curriculum, his experience as manager of the National R & D in the area of Technology Electronics and Communications (post which he has occupied since 2007) and the fact that he has been the promoter of numerous business initiatives were the key to put the balance in his favor. 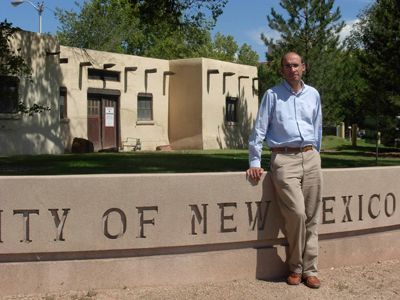 The granting of this professorship, the only one dedicated to technology, named after Prince Philip, will continue to achieve the strategic goal of increasing the prestige and international visibility of Gradiant as well as, open new lines of research excellence in leading edge topics that are of interest to R & D companies of the Trust. Furthermore Gradiant will also benefit by establishing relationships with universities, research institutes and companies from the U.S.

The Prince of Asturias Professorship in Science and Information Technology is linked to the Universit of New Mexico (UNM), one of the major U.S. universities to have experienced the fastest growth in R & D government funding since 1990. This increase was facilitated by the high qualifications of its investigators and by an active policy of relations with the private industry, University and research centers, including the famous Los Alamos National Laboratory, Sandia National Labs and the Air Force Research Lab. The UNM stands out for its research in wireless communications, optoelectronics, microelectronics, graphics and visualization, networked control systems, biomedical engineering, and high performance computing, which have gained international recognition. As a result of such excellent qualification, many high-tech companies like Intel, Lockheed Martin, SAIC and Boeing have established research centres in the vicinity of the NMJ.