The radio electric spectrum can be considered a limited natural resource. This is the main reason why its use by different communication systems is locally licensed in each country


The radio electric spectrum can be considered a limited natural resource. This is the main reason why its use by different communication systems is locally licensed in each country. If we scanned portions of this spectrum we would find that there is a different level of occupancy depending on the band analyzed. Some of these bands are largely unoccupied most of the time while other bands are extremely occupied. 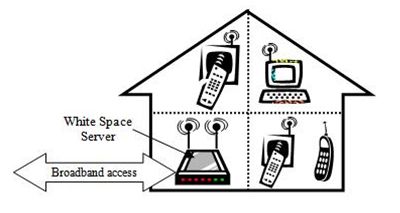 A clear underutilization of the spectrum is one of the reasons behind the recent development of the Cognitive Radio concept. The use of the radio electric spectrum can be significantly improved by making possible for a secondary user to access an unoccupied channel at a certain location and time.

Cognitive Radio Systems must have the ability to sense the spectral environment over a wide frequency band in order to detect these unoccupied channels, also known as “spectrum holes”. Based on the spectrum availability and some additional captured information, some users can allocate a channel that meets the communication requirements.

New chances arise in order to provide wireless unlicensed services. These new services could be divided into two categories. On one hand we have low power personal or portable devices, including wireless PC cards, wireless in-home local networks or multimedia distribution devices. The second category would consist of higher power “fixed” devices that could be used to provide certain commercial services such as broadband Internet access. A clear example of these applications is the IEEE 802.22 standard. This standard is aimed at providing broadband access to hard-to-reach low population areas, mainly rural areas, allocating locally unused TV channels.

One of the reference blog s in this field, http://spectralholes.blogspot.com/, keeps an updated record of the most significant research and administrative novelties in the US and Europe.

In this regard, Gradiant is currently working in different fields of Cognitive Radio such as spectrum sensing, study of interferences or geolocation databases.