Augmented reality, taken as the projection of virtual objects over the real world, is a mature technology. According to a Gartner Research report, it jumped from the labs to the general public about 2005. Later, augmented reality was applied to mobile phones. Nowadays, usability keeps improving, as new devices are being considered, such as glasses or contact lenses.

Google Glass (http://www.youtube.com/watch?v=9c6W4CCU9M4) is a representative  innovation in this field. the information is superimposed on the visual field following  voice commands.

Augmented reality apps may also be classified in two broad categories: (1) location- and (2) pattern-recognition based. Some apps share features of both groups.

Location based apps use sensors as GPS or accelerometers. Once the application is launched, it receives data from the sensors and displays virtual data on the screen depending on the device orientation. Layar, Wikitude or 3D Compass AR are well-known examples of this group. Google SkyMap, Star Walk or Spyflass are entertainment apps for education on the solar system. Other possibilities are games (e.g. SKy Siege) or social media apps (e.g. Yelp Monocle).

The apps in the second group rely on marker recognition, using QR or specific images (e.g. faces). The application replaces the marker on the screen with a static or moving element, such as a 3D object. These apps are useful for education (AR Chemistry, LearnAR), construction (guided tours in hotels), marketing (virtual fitting rooms), entertainment (some games), industrial maintenance (automotive apps), etc.

In Gradiant we are currently working in diverse augmented reality projects for mobile devices, enabling context-dependent information systems for the health and automotive sectors. 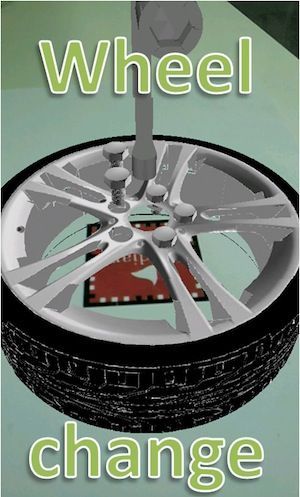