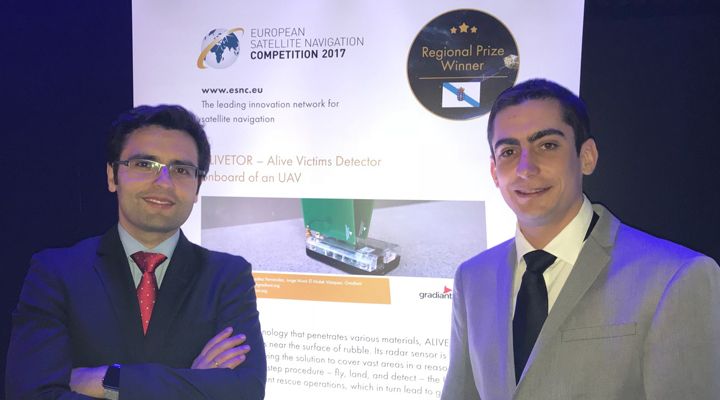 A radar technology solution for rescuing victims in disaster scenarios, increases the chances of saving lives

Alivetor allows to detect victims of catastrophes that remain underground, or trapped in the rubble of a building. Using radar technology that penetrates various materials, the solution detects alive victims by mounting sensors onto an Unmanned Aerial Vehicle (UAV), allowing the solution to cover vast areas in a reasonable time. Alivetor works by capturing and positioning victim’s movements or, if the victim is unconscious or resting, by detecting the minimal displacements caused by respiration. Developed by Gradiant, Alivetor has won the Galicia Challenge of the European Satellite Navigation Competition (ESNC) 2017.

The ESNC 2017 awards were presented during the night of this Tuesday at the main event of the European Space Week, organized by the European Commission between the 4th and 9th of this month in the Estonian capital, Tallinn. Alivetor had reached the final after being proclaimed winner of the competition in Galicia, organized by the Consorcio de la Zona Franca de Vigo. And in Tallin it obtained one of the 3 special awards of incubation services granted by E-GNSS Accelerator, the European acceleration program for start-ups that carry out technological developments based on the Galileo system, the European satellite navigation system.

The leaders of the Gradiant team that was in charge of Alivetor were in charge of defending the project in the final phase of the ESNC 2017. The explanation of the characteristics and functionalities of Alivetor was entrusted to the director of the Advanced Communications Department of Gradiant, Jorge Munir El Malek Vázquez, and Pablo González Fernández.

Alivetor allows to search for victims in vast areas of territory in a short time in catastrophe scenarios. Its sensors work with electromagnetic waves and can detect the presence of people trapped up to half a meter deep and through materials such as stone, wood, earth or clothes. Through its GNSS satellite connection, Alivetor transmits the exact location of the data it obtains.

As highlighted by the jury of the European Satellite Navigation Competition, it greatly reduces the search times of people with life after a catastrophe, which is essential to minimize the final number of victims.

Vigo Free Trade Zone is the organizer of the European Satellite Navigation Competition in Galicia. That is why the State Delegate , Teresa Pedrosa, was also present at the awards ceremony and in some of the activities of the European Space Week. “With actions like this we promote our business incubator and the aerospace sector,” explains Pedrosa. “The promotion of the aerospace industry in Galicia is one of the main lines of work of the Free Trade Zone and is also a bet for other administrations such as Xunta de Galicia. To be able to count on the knowledge of Gradiant and its work teams in our incipient aerospace sector an important strength”.

Thanks to the bonus of 62,000 euros granted as part of the European award for E-GNSS, Alivetor will be able to participate in an acceleration program that Vigo Free Trade Zone Consortium will design according to its project, as well as staying in one of its network nurseries Consortium.

In the Galician phase organization of the European Competition, from which Alivetor agreed to the European final of the awards, allies also participated, such as the University of Vigo, under the baton of Professor Francisco Díaz, CINAE, Campus do Mar and atlanTTic. In the Estonian capital, Tallin, the Director of Economic Promotion of the Free Trade Zone, Rosa Eguizábal, and the Commissioner of Vigo Tecnolóxico of the University of Vigo, Edita de Lorenzo Rodríguez, also supported the representatives of Gradiant.