The term domotics used to be associated to home automation and electronic control with the ultimate target of providing a higher degree of comfort and energy savings. Currently, domotics covers multiple aspects related to home living, including electrotechnical systems (turning on / turning off the lights, opening / closing doors, windows…), security systems (presence detection, SOS services…), multimedia systems (audio / video, online gaming …) and communication systems (access to the telephone network, …) in a broader context which intertwine with the digital home concept 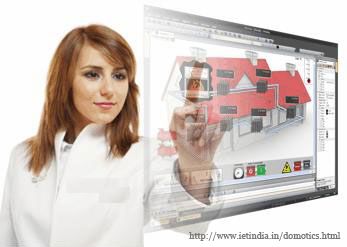 The general structure of domotic systems consists of three basic elements: one or several controllers (according to a centralized or distributed architecture) responsible for managing the system, actuators that receive controller commands and perform the required action, and sensors that monitor the environment and generate events which are processed by the controller. The communication of these devices is implemented by radio or by cable and several types of networks (star, bus …).

An important and distinctive part of domotic systems is the controlling interface, which is usually implemented by means of PDAs, touch screens, keyboards or computers. Nevertheless, the evolution of the human-machine interfaces, in parallel with other technologies for the future digital home, is in the direction of achieving a more natural interaction. In recent years, we have observed major advances in the field of user interfaces, from the almost exclusive use of keyboards to touch screens which are currently omnipresent, specially in handheld devices, largely promoted by the iPhone success.

In the area of home automation, the greatest advances in user interfaces probably have occurred in the voice recognition field, a technology which has achieved a high degree of maturity over the last years. Currently, voice recognition systems are able to handle large vocabularies with a high degree of independence from the speaker. There are many commercial products that provide integrated voice control, getting us closer to the moment when all housing systems could be controlled by simple voice commands. Probably, the biggest challenges for their massive introduction in home automation systems will be the increase of robustness against uncontrolled acoustic conditions and spontaneous speech recognition.

The next step in the evolution of natural interfaces can be found in gesture-based communication, by which the user will be able to control devices by gestures that are recognized and interpreted by the home automation system. The field of gesture recognition has witnessed major breakthroughs in the recent years: a few years ago, most systems were mere experiments tested in laboratory conditions; currently we have systems operating in commercial products. A clear example is Microsoft’s Kinect (http://www.xbox.com/es-ES/kinect) which is able to recognize gestures made with any part of the human body. The possibilities of these technologies, initially designed for entertainment systems, show a big potential for their application to digital home environments and interaction with domotic systems.

Voice and gesture-based interfaces, besides being complementary to each other, share the common objective of freeing the user from the need of carrying additional control devices. The next big challenge is to achieve the automatic adaptation of domotic systems to the people by recognizing them and adapting automatically to their tastes and needs. Biometric technologies is one of the cornerstones for realizing this vision. In the long term it is expected that affective computing technologies, still in their infancy, will play a major role in this regard.

Gradiant firmly believes in the great impact that man-machine interfaces will have in our future lifes. For this reason Gradiant is fully commited with projects in this field, supporting the use of new interfaces and their integration in the future of home automation.