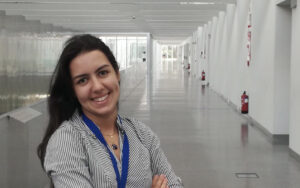 Xunqueira Ézara is from Redondela (Pontevedra). After some time working hard in several projects, she has proven to be a key player in her team. Her colleagues highlight both, her sense of humour and her work capacity, as well as being really competent in the field. Xunqueira studied Aerospace Engineering at UC3M, in order to begin her professional career with Gradiant family. When she is not working, she likes to spend her time with her family, playing sports and watching series, although she does not neglect her other passion,astronomy.

Xunqueira is one of those young professionals who stands out from the beginning. Today, she is talking about her references in technology and what motivated her to work in this field, but we are sure that in a few years it will be others who name her in their interviews. We take advantage in a new instalment of 21st century Women Technologists.

I always leaned more towards the technology field, since I was a child. I saw it as a very interesting world where you can always learn new things because of its constant evolution.

I’m currently involved in a drone-related project. The goal is to increase the flight time so we don’t depend so much on batteries.

The best thing about this job is that you never get bored. There always are new challenges ahead and that force you to learn new things every single day. I think this is something that does not usually happen in other sectors and only those of us who are dedicated to technology can enjoy.

I have several, but I think the main one is Valentina Vladímirovna Tereshkova, known for being the first woman to go into space.

How do you imagine your career in technology? Where would you like to go?

I don’t like to think about achieving a specific goal, but about moving forward and achieving small goals along the way. I think this way you end up reaping more success than if you just focus on achieving something in the long run.

What would you say to the technologists of the future?

I would tell them that it is difficult, but it is worth it. Do not be afraid when choosing this field because the effort always ends up paying off.